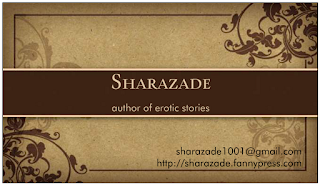 So, upon arrival, I presented myself to the woman at reception and asked if she had an envelope for Sharazade. She did.

“Can I just see some photo ID?”

“Because that isn’t my legal name.”

We stared at each other for a few moments, neither one of us quite sure what to do next. Then I had an inspiration.

I got my room key; but I’m not sure that would have worked anywhere other than Las Vegas.

That’s the mask I wear as an erotica writer: my pen name. I often hear people refer having a pen name and a real name. However, that distinction doesn’t feel correct to me. Sharazade is not my legal name; it’s not my passport name. But it’s certainly my real name.

Not everyone would agree. Recently I was approached (online) by an indie fiction writer who wanted some editing. We chatted a bit about rates, and then he asked if he could have my real name. “Sharazade,” I said, “will do, or just Shar.” No—he wanted my “real” name. Even if it was just a first name. Without that, he said, he would not do business with me.

Now, obviously I could have picked anything—I could have said I was Edith or Nancy or Esmeralda or Sarah, and he’d never have known any better. But I was a little put out at being told my name wasn’t real. I mean, I write with this name. I publish with it, and I am published under it. I edit and consult. I blog as Shar. I interact on Facebook, Twitter, and Google+. I do public readings, and I attend conferences, and I give workshops. I’ve done a radio interview on NPR as Sharazade. How is the name not “real”? I declined the work opportunity, and wished him all the best in finding a suitable editor.

I’ve seen erotica authors on forums and lists imply—or outright state—that those who use pen names are hiding. I suppose you could see it that way. To me, it feels more like I’m shining the light on a different facet. It might sound more romantic to say that when I slip on the mask of Sharazade, finally my forbidden sensuous thoughts flow freely from my now-unfettered mind. But that’s not quite the case. It is more like, well, like holding a piece of paper in front of a light. Some of what’s below is now in shadow; some in light. But what’s in shadow is still there. It’s simply not the focus at the moment. In the same way, a physical mask might say, “Don’t look at my face right now—look at my body, or listen to my voice, or watch me move.” Not a lie; a different emphasis.

In many ways, my name division is a work division. Non-Sharazade works in non-fiction; Sharazade works in fiction. Non-Sharazade works in some pretty conservative sectors and countries; Sharazade is surrounded by open-minded and, for the most part, liberal readers and authors. Neither aspect of me is false. Neither one is a part I dislike. None of my roles are resented. They’re just different. A woman might be “Sweetheart” to her husband, “Mom” to her kids, “Melissa” to her friends, “Ms. Smith” to a client on the phone, and “Keith’s mom” to her son’s friends. None of those names are fake. They just show different aspects. Sharazade can assume that the people she’s talking to have an active interest in sex and in fiction. It’s a good bet they’re interested in bookstores and publishing. Many share my love of grammar and words. I don’t have to ask what their opinion of PayPal’s recent moves was. It’s a comfortable community, and I feel at home in it. I feel at home as Sharazade, just as in other circles, I feel at home being called something else.

What would happen, I’ve been asked, if I were outed? Well, not too terribly much. If it got spread all over the Internet, I could lose some job opportunities. I suppose in some of the more conservative countries I travel to, it could cause visa problems—assuming it got that widespread. It could cause some embarrassment to a few family members whom I’d rather not embarrass, though nobody would really freak out much. I have far fewer potential penalties than a lot of erotica writers.

Even if there were no penalties at all, though, I’d keep this mask. I like writing as Sharazade, she who was so sure of her story-telling abilities that she bet her life on them. And won.

(The reason I chose this pen name can be found here.) 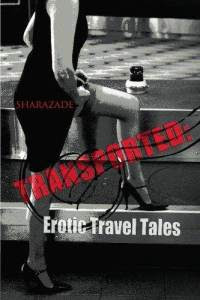