I have enjoyed reading this week's posts-- seeing familiar names of editors I have worked with, editors I wanted to work with and others who have been so important to my erotica writing world. Marcy Sheiner was the first editor to publish my work in print (in Best Women's Erotica, of course) and I learned so much from her editorial process even if it hurt my ego at the time. Adam Nevill bought several stories from me for various Black Lace anthologies and he is a prince among men. I would write for him wherever he went-- and that's why I'm writing for Mischief now.

Kerri Sharp never bought anything from me during her tenure at Black Lace, but she did send me a very thoughtful, encouraging rejection in my early days of erotica writing. By the time I'd gotten up the nerve to send her something else, she was leaving Black Lace and Adam was taking over. I was struck by her wit and charm and regret that I never got to work with her. 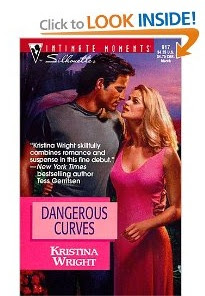 In the mid-nineties, I started reviewing romance novels for the now defunct Literary Times Magazine. (Think RT Book Reviews on a smaller scale.) I hadn't really read romance since I was in high school, so it was an education to see how far the genre had come. I devoured them, reviewing 4 or 5 books a week. After about a year of reviewing romance novels of every subgenre, I had the brilliant idea that I could write one. After all, I knew what was selling and which editors were buying, thanks to the acknowledgements and dedications. To this point, I'd been writing short horror fiction (all unpublished), greeting cards, essays and the like. I'd started a couple of novels but never finished anything. Reading a couple hundred romances proved to be the perfect training ground for writing one. (And something I'd recommend for any new writer-- being a book reviewer makes you read critically and analyze why a book works-- or doesn't.)

Dangerous Curves was the second full-length novel I ever wrote. My first was Faith, the first book in a trilogy of historical romances. I never sold Faith and I never wrote the other two books. Trust me, it was for the best. I was not meant to be a historical romance author. When I was still writing Dangerous Curves, I entered the Romance Writers of America's Golden Heart contest. The Golden Heart is the contest for unpublished romance authors (the Rita is for published authors). I'd already entered Dangerous Curves in a couple of regional contests and done well, so I thought I'd give the GH a shot.

Long story short, in 1998 I won the Golden Heart award for Best Romantic Suspense. The final round judges were editors who acquired in the genre. The Silhouette editor who judged my category contacted me about submitting the final manuscript to her. Here's the ironic part-- my agent had already submitted Dangerous Curves to a different editor at Silhouette (now folded into Harlequin) and that editor wanted to buy it. So right out of the gate, I had to tell an editor that my book had been acquired by someone else. It was a heady experience.

The editor who ultimately bought my first novel was Mary Theresa Hussey (known as Matrice, if you're lucky enough to work with her). I was terrified of Mary Theresa. She was a big New York editor at the major romance publisher. Say what you will about Harlequin-- and it's all been said-- but they know how to market romance fiction and they are constantly evolving to suit the interests of their readers. I thought that selling my book to Silhouette meant I was done and could sit back and enjoy the glory. Hardly. Matrice and I talked on the phone and she told me she'd be sending me a revision letter. I stammered enthusiastically that I was willing to make whatever changes she thought necessary. I'd heard about diva romance authors and didn't want to be perceived as one of them.

The revision letter I got the following week was as long as the first chapter of Dangerous Curves. Or at least it seemed like it. I'd have to dig it up, but I believe it was three single-spaced pages. I was literally in tears after reading it. How could she possibly want to publish my book if there was this much wrong with it? There was a whole subplot she wanted me to cut, as well as toning down some of the language and taking out two sex scenes (foreshadowing my erotica writing career, perhaps). There were some things she wanted me to do that I didn't even understand-- I had to call her for clarification.

I took a few deep breaths and dug into her revisions. It was scary as hell to take my original vision for my book and make those changes. I had to unravel an entire thread (that's how I thought of it) of the story to strip out that subplot she thought didn't work. A few weeks later, I had a leaner, better book. Despite the revisions from hell (which is more or less what every Harlequin/Silhouette author called them), my first book sale came easy. Maybe too easy. I was never able to sell a second book to Matrice, or any of the subsequent editors I worked with when I was passed on to a new editor. I became more and more discouraged. I stopped being enthusiastic about what I was writing because it seemed liked everything was getting rejected. I didn't want to get too invested in a story only to have it turned down.

In retrospect, I missed opportunities to make that second sale because I had it in my head that it shouldn't be so hard once I made the first sale. But hell, I was barely 30 and had never really had a hard time getting what I wanted if I put in some effort. It's a curse of the academically gifted to be surprised when something turns out to be harder than we expect. Making that second novel sale became the elusive goal that evaded me and I couldn't understand why. I had an agent, a coveted award, a publishing contract with a New York Publisher. Making another book sale should have been easy, right? In truth, making the second book sale is even harder than making the first sale-- the bar has been set, along with the expectations, and nothing less than the best will do. In my case, I wanted to write in other subgenres and wasn't giving Silhouette what they wanted to see.

I never became a diva, but I did become my own worst enemy. I resented my agent for not telling me the "right" thing to do; I resented Mary Theresa for "abandoning" me to a new editor, then I resented that editor for not knowing what the senior editor would like. Etc. After a time, I resented my own laziness, expectations and/or lack of skill (depending on the day and how depressed I felt) that was keeping me from making another book sale. And so, in a rut from submitting endless proposals, I turned my back on Harlequin and focused on writing erotica. While I love my erotica writing community, I often wish I hadn't walked away from romance fiction so quickly. But at the time, with an award and book sale coming back-to-back within a year or so of starting to write novels, it didn't seem quick. It felt like forever. And when I didn't make another sale in eighteen months, I pretty much gave up.

I haven't sold another novel since Mary Theresa Hussey bought Dangerous Curves. Of course, I haven't pitched a novel since those couple of years after my first book sale. I've had a hundred (at least) writing sales since then, but with the exception of a few NaNoWriMo novels (mostly unfinished), I have meandered off the novel path entirely. I'd like to get back there. I would like to write (and sell) another novel. Or two. Or a dozen. This time around, I will remember what I learned from my experience with Mary Theresa Hussey-- that a revision letter is not a punishment, it's a reward for writing a book that an editor thinks is worth publishing. It's a guideline for making a better book. It's a commitment from an editor who believes in me. I didn't take full advantage of all Matrice had to offer in terms of knowledge and experience-- I won't make that mistake again.

A quick check of the Harlequin website shows that Mary Theresa Hussey is now Executive Editor. It doesn't surprise me in the least that she's still at Harlequin and has moved up the editorial ladder. I sincerely doubt she'd remember me-- a one hit wonder in the late 90s-- but I will never forget her and I'm very grateful for the time she put into making my first book the best it could be. I learned a lot from my experience of that first sale-- I just wish I'd learned sooner.
Posted by Kristina Wright at 12:01 AM