The first time I ever read Bram Stoker's Dracula, I was in fourth grade. I devoured it (pun not exactly intentional). I've read it countless times (look, another pun!) since, and now that I'm pushing the age of thirty-six, I've come to realize the story is missing...something. There have been untold numbers of vampire stories, even some playing on the Dracula story itself, but nothing will ever hold the same magic for me as the original. But...what if there was an extra spark? An element of...oomph... Something someone like me--who's made a career of writing explicit love scenes--can really sink his or her teeth into. (And no, I'm not doing the puns on purpose. At least, I don't think...)

The notion of adding a bit of spice to the story makes me want to pull my paperback copy off the shelf and let my imagination run wild. What would happen if, say, the Count took a liking specifically to Jonathan, instead of Mina (or Lucy)? Would Jonathan succumb to the Count's otherworldly charms? Would he give in and let the Count claim him, body and soul?

In my (somewhat depraved) imagination, he sure as hell would.

What about D'Artagnan and his fellow Musketeers? Maybe Aramis, a very devout man, simply needs someone to show him what can be had at the hand of another man? I can certainly picture someone like Porthos debauching him. There's something unbelievably sexy about such a deeply religious man caving to carnal pleasures. I wonder if Dumas ever thought about his Musketeers like that. Probably not, but I sure do.

Of course, there's always Achilles and Patroclus. That relationship is still up for debate in some circles, but I love to think that the two men were far more than brothers-in-arms. The love... How could anyone not see it? All the story needs is a few explicit, no-nonsense love scenes to cement that one. It ranks right up there with Alexander and Hephaestion, or... Phillip II and Richard the Lionheart. (Have any of you ever heard those stories?) The rumors abound, and leave it to my brain to pick out and piece together tiny little fragments of lust and love, no matter the source.

I could go on and on and on, really. I love classic literature, and I love history. If someone writes a bit of debauchery into The Iliad or The Three Musketeers, then I'll be one of the first to snatch up a copy and read to my lust-filled heart's content. While not every classic piece of literature lends itself to love scenes, those that do can only get better. 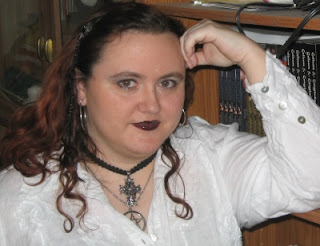 What do online gaming, Spongebob, cooking, writing, and an unnatural addiction to Mountain Dew all have in common?

Not a damn thing, which is what makes Mychael Black an interesting bird indeed.

Born in north Alabama, Mychael now resides on Maryland’s Eastern Shore. Having run the gamut of labels in regard to gender and sexuality, Mychael now shuns society’s views on normality and embraces a poly-everything attitude. Call Mychael her or him—it doesn’t matter. Just keep reading the books.