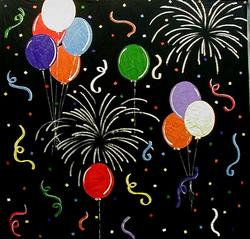 
It's hard for me to believe, but in January 2013, I will turn sixty. Am I looking forward to beginning my seventh decade? Well, as they say, getting old is better than the alternative!

My mother died at fifty-two. One of my dearest friends succumbed to ovarian cancer at fifty-four. Life is always uncertain. My reaction to that hard fact? Celebrate whatever and whenever you can. Thus, even though we really can't afford it, we're throwing a massive party to celebrate my hitting the big Six-Oh. It only happens once!

Since I live in the tropics, the party will be outdoors, on the terrace of an oceanfront hotel. We'll have a buffet dinner, wine and beer, plus an open bar. I'm hoping to hire a band, though I haven't located one yet. In my view, it's not a party if there's no dancing.

The hotel wanted me to commit to a minimum head count. That's pretty tough, since the majority of people I'm inviting live in the U.S. I know from personal experience how difficult and expensive it is to travel halfway around the world. I've tried to balance realism with wishful thinking in my estimate of forty people. I was amused to find that the hotel thinks this is a small party.

In fact, several of my prospective guests have already told me they're coming. I'm thrilled, although some close friends have regretfully declined as well. The RSVP deadline is still several months away, so I'm keeping my fingers crossed. Of course, if everyone invited actually showed up, we'd be way over budget. Not that I'd begrudge the money – it would be worth it.

Meanwhile, the event has given me the opportunity to reestablish contact with people I haven't heard from in a long time. I sent invitations to friends I figured wouldn't be able to make it, just to open the lines of communication and let them know that I thinking about them, that I'd love them to be here if it were at all possible.

The whole process has been great fun so far – finding a venue, deciding on the menu, creating invitations and the guest list, handling responses – and I'm looking forward not just to the party itself but to all the interactions leading up to the event. I haven't entertained at this scale since my siblings and I organized my dad's eightieth birthday party a decade ago. I'm trying hard not to think about the possible disasters that could derail our plans. Worrying won't prevent these negative happenings, but it certainly will tarnish the pleasure of anticipation.

I think I need to plan another gathering, in either the U.S. or the U.K. (or maybe both!), strictly for my writing friends. What a fantasy – to meet you all in the flesh, swap gossip, share readings, drink and dance and revel in the company of fellow outlaws. I love living in Asia, but I'm pretty isolated from the erotica community. I'm definitely going to try putting a party together next time I'm headed for western climes.

For one thing, that will give me something to look forward to, after this birthday bash is history.
Posted by Lisabet Sarai at 3:00 AM