Ever since I began reading (which was not long after I got out of diapers), I've loved historical fiction. As a child, I couldn't get enough of ancient Egypt or imperial Rome. Give me a tale set in medieval France or colonial America, Moorish Spain or Druidic Britain, and I would disappear into that other world for hours or even days. My mother would despair of getting me to do my chores or persuading me to go outside and play. The historical realms that I visited seemed far more real than my family's three bedroom ranch house or our grassy back yard.

I still enjoy a well-crafted tale centered in another time and place. In fact, I think I appreciate historical fiction more deeply now that I understand how difficult it is to write it well. A successful historical novel should transport you back to the past. You should see the sights, smell the smells, experience the sensual delights and the painful inconveniences of the time in which it occurs.

Of course, you've also got to get the details right. However obscure the period that you've chosen, there's bound to be some reader who will be an expert on that time, that dreaded critic who will throw the book at you (literally!) when your characters in twelfth century England drink tea, or your Aztec prince wears robes of silk. I remember long rants on the Erotica Readers & Writers Association, because a well-known romance author mentioned a spinning wheel in a period before they'd been invented. (The ranter was an individual with extensive knowledge about textiles.)

Immersive description and obsessive accuracy are not enough, though. To write convincingly about another historical period, you need to have a sense of how people thought, what they believed, how they behaved - the unspoken rules and assumptions of their society. In medieval times, for instance, God and religion loomed very large in most people's consciousness. Meanwhile, life was short and fraught with danger, even for members of the upper classes. Throughout much of history, in many societies, women have been relegated to the status of children or even property, with little or no personal freedom. I've read some so-called historical  erotica set in eighteenth century Europe in which the characters acted, and interacted, in ways that were far too modern to be believable (particularly in the area of sexual expression). These books might be entertaining, but they didn't really deliver on the promise of a genuine historical experience.

To be effective, a historical novel must also capture the cadences and vocabulary of speech in the period. It helps if the prose also adopts the grammatical structures used during that time. Short declarative sentences are a relatively modern development in fiction. Multiple dependent clauses, subjunctive mood, passive voice, and lengthy description were common and approved structures in the English up until the middle of the twentieth century.

Another author who excels at bringing the past to life is Sarah Waters. I'll never forget the “aha” experience of reading Tipping the Velvet. Given the novel's rather unusual setting (the world of music hall performers), I can't guarantee the book is realistic, but it certainly felt real. Ms. Waters manages the same feat in The Night Watch, evoking London during World War II with astonishing vividness.

Most of my own work thus far is contemporary, though I have taken a few stabs at history -- with great trepidation! I have a story that unfolds in Shakespeare's time (Shortest Night) – and indeed which includes the Bard as a minor character -  and another set on a tea plantation in British India just a few years after the first World War (Monsoon Fever). One of my earliest published shorts, Communion, takes place in a convent in thirteenth century France. In general, though, I've avoided writing historical tales, out of a combination of fear and laziness.

There's one time period that is an exception, however: the Victorian era. Sometimes I believe that I had a past life during Victoria's reign. Even as a child, I was attracted to the period's architecture (my siblings use to tease me about my fondness for “gingerbread houses”) and styles of dress (in high school, I often wore high-necked blouses with cameos at the throat and long, full skirts). I remember visiting the Tampa Bay Hotel, a classic example of the Victorian fascination with all things “Oriental”, and having the distinct impression that I'd walked those dark, high-ceiling corridors before. And during the eighteen months that I lived in Boston's Beacon Hill (where the buildings mostly date from earlier in the nineteenth century, but which had its heydey during the Victorian era), I felt as though I'd come home. 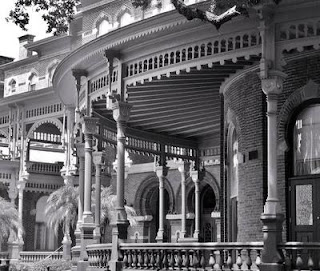 Meanwhile, writing Victorian fiction is easy for me – well, as easy as writing ever is. I can hear the language of the times in my mind. I can picture the settings, smell the coal smoke, hear the clip clop of horse's hooves on the cobblestone streets and the cries of the market hawkers. I imagine the whale bones of my corset, biting into my flesh. I fear the social and economic ruin that would ensue if my true, sensual nature became known.

I've written a variety of shorter works set in the Victorian period, including a couple of steam punk stories. My longest literary sojourn in the era, though, is in Incognito.  The novel includes has a subplot, revealed in an antique journal, which takes place in Boston in the 1880's and involves the wife of a wealthy merchant who, like my heroine Miranda, has a secret life of sexual excess. At least a quarter of the book takes place in the nineteenth century.

That part simply flowed from my metaphoric pen, with little conscious effort. If you want to read an example, just click here.  I did some research, particularly in the area of costume, but the character of Beatrice came to me full-fleshed, complete with her forbidden hungers and her knowledge that her adventures might well destroy her life and livelihood.

Even if there's a logical explanation, I like to pretend that in a previous life I was someone like Beatrice. Maybe in the future, I'll try to write the story of that past life.