Oh boy! Here’s where I get to show an aspect of my life in the non-literary arts. In fact, this post is pretty much how writing occupied my life before the filth. Momma and I used to design, cut-and paste (scissors and glue) my promotional materials and exhibit catalogs. I also did free-lance attributions, authentications and descriptive copy for auction houses.

Regarding this topic, the virtues of a minimalist lifestyle have been extoled. Although that’s good and fine for some individuals, there are others to whom objet d’art occupy a more important position.

A fragment from a Roman marble statue. 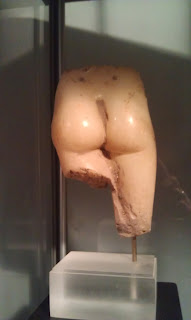 Turn this around, and there’s no doubt as to gender. A fragment yes, but what remains attests to the quality of the original piece, although we’ll never know if this gal ever looked any better than she does right now. Not a Canova tush, not a Katherine-Zeta-Jones tush, but a fine tush just the same.

Ex- David Hendin, private collection. Mr. Hendin, a noted Levantine scholar, has published numerous references on biblical numismatics. This piece occupied a spot in his private office for many years. 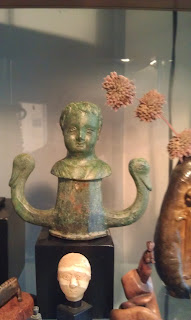 Momma X kept this on her desk for years as production manager in a publishing house. Note how the artist used qualities of the stone when considering how to carve this piece. Like war paint. 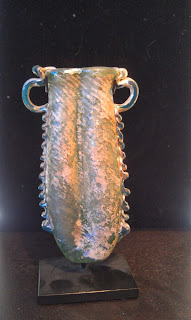 Swirled, light green glass, 2-reservoir vessel with contrasting dark blue handles and trailing. Such a pretty presence, most likely used to store and display cosmetics for a woman of very high rank. Absolutley perfect, no chips. This is the stunning iridescence that inspired Tiffany and later modern glass masters.

I had the opportunity to appraise the Griffin ancient glass collection. IMO this was the most attractive piece he owned. Nice to have first glance at it when it came to market. I knew I wanted it, and bid successfully at auction. 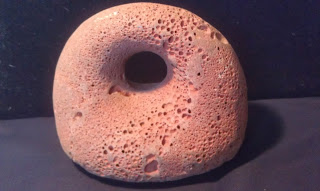 Pacific Islanders gleaned their carbohydrates from the starchy poi root. But Kauai is the only island in the Hawaiian chain that uses the ‘ring’ type poi pounder. In fact, this graceful example is in red tufa, from the little island’s northern end, where this type of rock is found. Quite rare.

Ex: Juaquina’s Antiques, Kauai. Purchased from a field worker in the 1970’s

Pleasing objects are all around us, and often may be picked up free of charge. 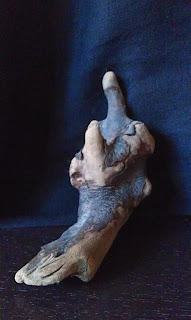 Found while walking in the woods in Northern California.

A friend has a 16th century, life-size Madonna and child in his home. The features on both heads have been worn from five centuries of worshipers’ caresses and look pretty much like this. I think I’ll give it to him some day. 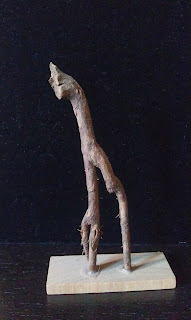 Momma X spotted this along the same path. 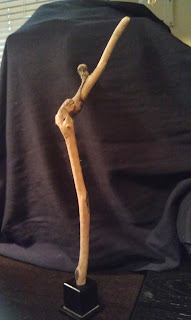 Years ago I took this dynamic object to the guy who mounts my art on stands. He gave me a funny look. When I got his bill, it simply said ‘mount stick’.  It’s more than just a stick to me.
H: 15 inches 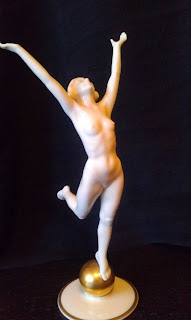 Most Tutter porcelains wind up painted under the glaze. But I’m sure glad they left this one white.
Rare as such. 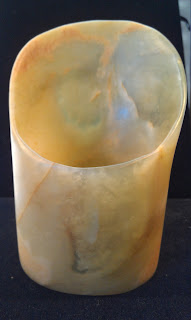 Purchased within 20 meters of the China/Burma (Myanmar) border. The shop owner tried to explain that it was a ‘scoop for measuring grain’. Not only was this carved from one piece of premium jade; it’s also hollow straight through, with holes drilled near the base. Not very useful as a measuring device, I surmised.

There are pictures depicting ancient Chinese royalty wearing these on the top of their heads, hair hanging over like palm fronds. Under the hairdo, a tube like this held the coif in place with what probably resembled a chopstick, stuck through holes drilled in the sides.

Far eastern art was never my most confident area of expertise, but I do know how to field-test for jade. The price the shopkeeper quoted just about covered the price of the gorgeous stone.

Soon after arriving back in the states, I took the piece to several experts. It’s real! An auction house wanted to estimate this gem at many multiples of what I paid. But for the amount spent, even I can afford to keep it.

Also met up with Lisabet and her husband on that Asian trip. Double good fortune. 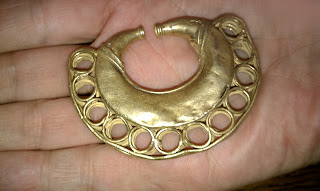 Collectors often see these described as nose rings. Not so.
Yes, that’s my pink hand holding it. 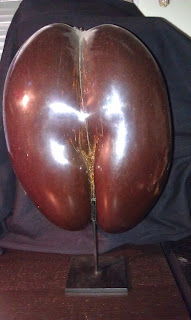 Coca de Mer
Seed casing from a palm that grows only in the Seychelle Islands
H: 13 inches

When the early Japanese found these washed up on beaches, they were considered sacred. This example has been smoothed and polished. I’ve always wanted one in its natural state with a tangle of thin vines… you got it. Right in there.