I wonder if I've shared this excerpt before.  I know I've posted portions of Audrey and Lawrence stories in the past, but there are 12 in total.  They're based on the 10 years of my life I spent as mistress to a married man. And, because adultery is so off-putting to so many readers, nobody buys the individual ebooks or the complete collection... so, hell, I might as well share them here.

The series has been on my mind lately because I just finished writing its companion piece, The Other Side of Ruth, four years after I started it.  It's the story of Lawrence's wife (that's the w-word Audrey can't bring herself to say) and her lesbian affair with a younger woman.

Anyway, back to Audrey and Lawrence.  This excerpt is from a story called Questions of Ultimate Concern: 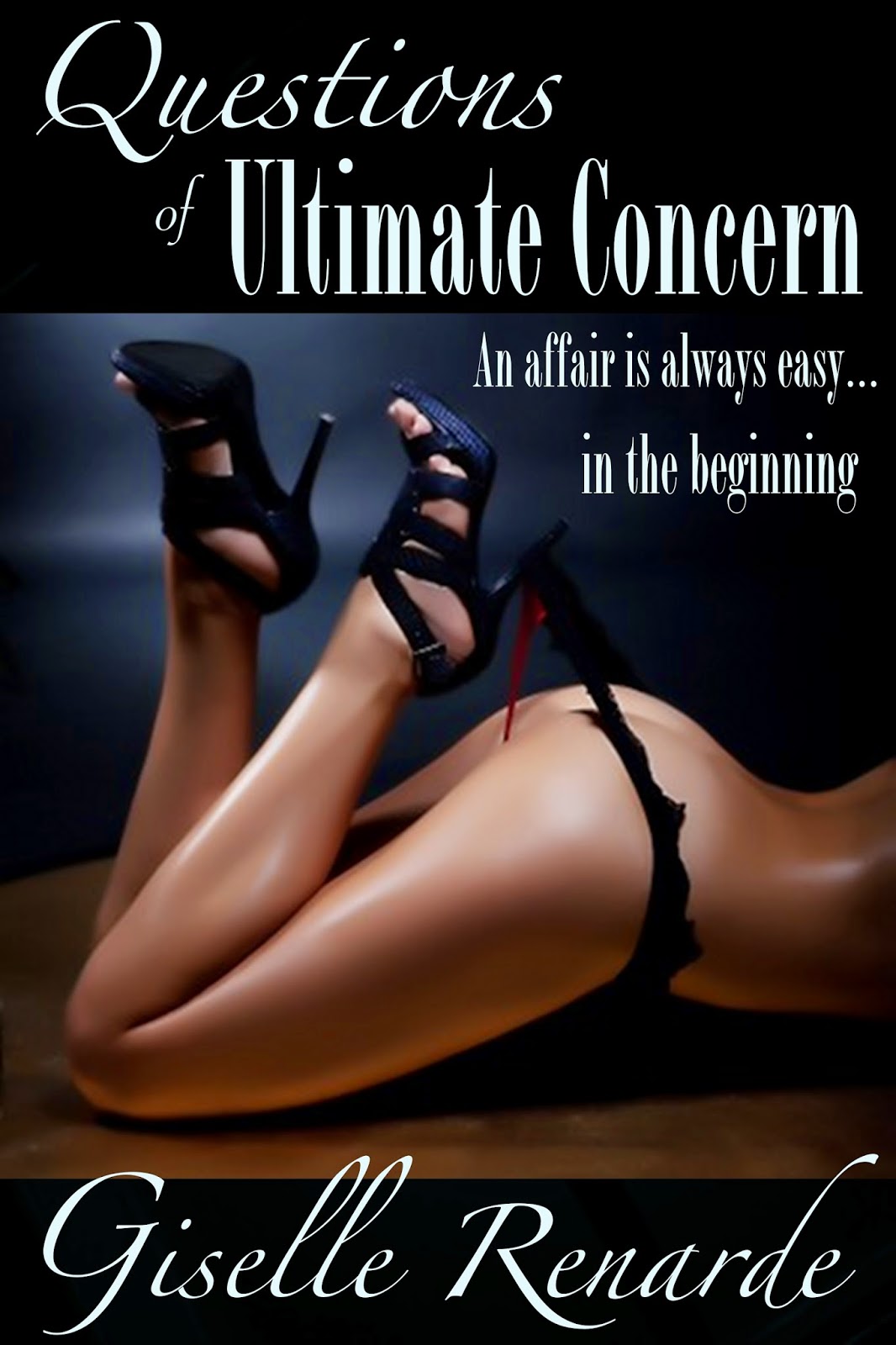 “I thought you were an atheist.”

“Why did you think that?” he asked.

“That’s what I believe,” he agreed, which only piled more questions onto my heap of scepticism.

“No,” Lawrence squeaked, like that was such an easy question to answer he didn’t have to contemplate it for even a moment.

“But if you don’t believe in God, why does your w…” Again, the unspeakable w-word tripped me up. “…Why does she think you’re at church?”

But he didn’t. He opened the covers and pulled my chilly body in next to him, wrapping me in his warm arms. That sense of a man’s big body pressing against mine for the first time made me feel wonderfully virginity. My mound tingled as its hair brushed the flesh of his slight paunch. I nestled my head in the crook of his shoulder, relieved he wasn’t running away from me.

“Because I used to go to church,” Lawrence finally responded from somewhere above me. I could feel his chin moving against my head as he spoke.

“Did you stop because of me?” I asked, looking up so quickly I smacked his chin with the top of my head. “Aïe!” I cried, while Lawrence sucked in air, making a hhhssshhh sound.

“Sorry,” he offered, though it wasn’t his fault. “No, it was just before I met you that I stopped going. I used to drive all the way out to my parents’ church every Sunday morning, attend service with them, have a bit of lunch, and then drive back home. It wasn’t about religion, it’s just what I did.”

“Yeah, it was a tradition. I didn’t think about why I was doing it, or how I might do it differently, or if I really felt inclined to do it at all. Every Sunday morning, like clockwork, I got up and went.”

“You went alone? What about…?” I hoped Lawrence would catch my drift because I didn’t want to use the w-word again.

“What about the person with whom I share a marriage certificate?” he laughed. Yes, that was one way of putting it. “She always preferred to sleep in on Sundays.”

“So, when did you lose your faith?” I asked, kissing the soft skin along his collarbone.

“When did I have any faith to lose?” he chuckled wryly. “I wasn’t raised to have faith in God, just to fear his wrath. For years, that kept me on the straight and narrow. Mind you, was it God I was afraid to upset, or was it my parents? Was it God the Father, or Father the God? And I suppose that whatever it was, it worked for a time. I was a good child, and then a good teenager, and then a good man…”

“And then you met me.” I giggled like a wicked fairy from the comptes de fées. I wrapped serpentine legs around his waist, and a forgotten sensation like burning ice coursed through my veins. I remembered how good it felt to be bad. “When I met you, petit, you were the image of a choirboy. You were such an innocent I had to corrupt you. And you said, no, no, no! You wanted to be the perfect husband, but would Audrey take no for an answer?”

Lawrence grabbed me round the waist, growling a little as he spoke. “When have I ever said no to you?”

Rolling him onto his back, I countered, “In the beginning, you said no, no, no to everything.” I punctuated each “no” with a sharp kiss to his neck.

“Not me!” he chuckled, smiling slyly as I hovered above him, my hair falling into his face.

“Yes you, monsieur le loup!” I replied like a little flirt.

His eyes sparkled as he awaited my descent, and I pulled my hair into a rope to get a better look at him. How could a bald man seem so childlike? What was he, nearly fifty? Older than that, perhaps? He could almost have been a baby.

Grabbing my ass, Lawrence pulled me close against him. Somehow, I didn’t expect his cock to be quite so hard. Tabernak, it was like a steel rod against my juicy mound as he slid me up and down by the hips. My desire to kiss him overpowered my resolve to tease him and, sinking my nails into his shoulders, I gave in to his warm mouth. His impatient tongue just about killed me as I rubbed my clit down his rigid shaft. Every time my pussy lips met his balls, my mouth fell away from his. He had to pull me all the way up again just to kiss me again.

Lawrence pulled away from my mouth just long enough to speak into my ear. “I wanted you to corrupt me.”

Like a jungle cat, my heart raged in my chest and my throat released a growling noise. I grabbed hold of his cock, wet with the juice of my craving cunt, and stroked it with an expert hand. Lawrence fell into a trance, gazing down at the fingers firmly enveloping him. My thumb smoothed a pearl of precum around his pinky-purple head as he looked on. His cock was mine, all mine.

“Do you want me to corrupt you now?” I asked, as if he had a say in the matter.

With a snorted kind of laughter, he cried, “God, yes!”

So, holding his shaft firmly by its base, I eased myself down onto it until his beautiful cock disappeared inside my body. Saint Ciboire, he felt huge inside the engorged walls of my cunt. Pressing my tits against his broad chest, I wrapped my arms around him. I wrangled his hot snake of a tongue in my mouth. He pressed on my hips. His hands helped my frenzied motion as I rubbed my clit against the fur of his pelvis. Tangled in his limbs, I couldn’t contain my expressions of joy when my core began skipping like a pebble across a pond.

“Tabernak, Lawrence!” I cried, throwing my body against his. His cock was so wet from my pussy juices that it slid effortlessly in and out of me. Pounding my mound against his pelvis, I couldn’t even let up when we were both tender and bruised. I knew I should stop, but I didn’t. The fullness feeling in my pussy threatened to explode my mind if I kept on grinding. Of course, I did. I couldn’t stop.

As I teetered on the brink orgasmic insanity, my thighs threatened to give out. Lawrence kept right on pushing and pulling me like a rag doll. Every muscle in my body, starting with my friction-warmed pussy, went into ecstatic spasm. As my eyelids scrunched closed of their own volition, I couldn’t help but cry out, “Ostie de calisse de crisse de saint ciboire de tabernak!” Then I fell like a twitching puddle against Lawrence’s smooth chest. When I was on top, I always came first. It was almost symbolic, I thought, like my pleasure came before his.

Bearing with me while I was temporarily lost in space, Lawrence issued the occasional thrust in my direction. I had little sense of time, but at some point he said, “What did all that mean? I’ve always meant to ask.”

“Ah, well, I swear a lot when I get very excited,” I laughed.

“Well, what did you say?” he prodded, slipping out from under me until my stomach met the mattress. Kissing my hair, my neck, my shoulder, he eased his eager cock inside me. His chest warmed my back. Tabernak, his cock felt even bigger in that rear-entry position.

“I never really thought about it, but all our curse words come straight from Catholic liturgy: chalice and holy host and tabernacle… In Québec, the sacred is profane. It’s bizarre.”

“Yeah,” Lawrence reflected, moving in slow, deliberate circles inside me, stirring my deepest regions. “I think it’s because sacred words carry such weight for the followers of any religion. When you abuse them, it’s an offence. My mother would never have stood for us taking the Lord’s name in vain.”

“Oh, God!” I moaned, mostly to tease him, but also because what he was doing in that moment felt incredible.

I could hear Lawrence smelling my hair, his face planted in the crook of my neck. He made no response to my tease, except to slide his hand beneath my body and press his fingers against my clit. Lawrence was all over me, on my back and caressing my front, shoving his generous cock halfway through my core. Through the veil of my hair, I was mesmerized by the sight of his hips pressing against my ass, my supple flesh giving way to his. It was like watching somebody else, like watching other people’s bodies. They looked too good, too golden, to be ours.
Posted by Giselle Renarde at 1:53 AM

Email ThisBlogThis!Share to TwitterShare to FacebookShare to Pinterest
Labels: adultery, sex and spirituality