I was invited to write a blurb. This in itself is not really surprising, but it happened in a surprisingly random way. 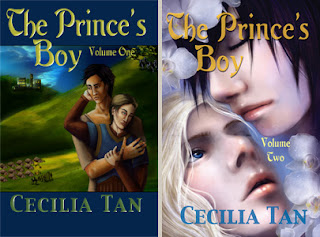 I commented that I liked the cover art (shown here), and that I loved the novels. Apparently I have fits of insanity. I really thought the title looked familiar, and that I had written a review of at least the first volume.

Cecilia immediately asked if I would write a blurb for the two volumes. No problem, I replied. I said I would find some suitable comments in my review, which I then searched for in my Documents.

While I scrolled through files called “Review” (like watching the credits at the end of a blockbuster movie), reality hit me. I’ve reviewed other work by C. Tan, but not The Prince’s Boy. And as I found out, there are 60 chapters.

I asked for the 2 volumes in an email, and Cecilia graciously offered them in any format that would work best. (The two PDFs downloaded nicely.)

Here is my first attempt at a blurb:

As a child, Prince Kenet chose his whipping boy, the one who would be punished in his place whenever the stern king was displeased with his son. In their hearts, the two boys are soulmates, and their love only grows stronger with time. Yet coming of age exposes the prince and his Jorin to every kind of danger. While exiled Jorin learns the ways of fighting men, Prince Kenet must overcome the powerful Night Magic that can turn pretty boys into whoreslaves. The fate of a kingdom depends on the greatest bond of all: a love that cannot be forced.

Here is part of the introduction by the author:

I must give you a warning, dear reader, before you begin. No, not the warning about the intensity of the bondage and sadomasochism scenes herein, not about the dubious consent, eroticized
violence, or situations of sexual jeopardy in these pages (though they are assuredly there). I must warn you that what you are about to read is a serial.

A serial? “How is that different from a novel?” you might well ask. It looks like a novel. It has chapters. It has an overarching fantasy plot that pits good versus evil. It is even a Romance with a capital R. Why isn't it a novel?

Well, common wisdom says a novel wouldn't have a sex scene in every chapter. That would be Too Much Sex for the reader, who would fall into fatigue--or worse, boredom. Sex should not be tedious! But The Prince's Boy was not written as a novel, with the sexy bits paced out here and there, but as a serial intended to be read one chapter per week. The serial began running on the Circlet Press website in July 2009 and wraps up in June 2011. My goal was to deliver a delicious meal each week to the hungry reader who had waited so patiently for it. I tried to get a sex scene into each chapter, or at the very least a torture or fight scene (and indeed, all these types of scenes somewhat blur together in this book).
---

Considering that m/m romance is not the first genre I reach for, I really did fall under the spell of this book. So apparently I was not lying when I praised it prematurely. After the prince and his “boy” are separated, and each leaves the relative safety of the castle, the reader is taken on a tour of the kingdom at war which replicates the honeymoon tour of King Korl (Prince Kenet’s father) and his bride in a happier time. Important secondary male characters appear, and they all have distinct personalities, talents, and motivations.

In Volume 1, Prince Kenet wonders how he, as the heir to the throne, could possibly keep his beloved Jorin by his side while fulfilling the royal obligation to marry and produce an heir of his own. Or how he could avoid that obligation without creating worse political turmoil than already exists. As things turn out, a long-lost brother solves the dilemma: he will not try to usurp the throne, but his children will be Kenet’s heirs.

Before this resolution is presented, the two lovers take turns narrating chapters while they are apart from each other, and they each learn things they could not have learned at court. The villain, who can take over the dreams of anyone he chooses to torment, is a collector of cocks, as well as of souls. (Like the witches described in the witchfinders’ manual, the Malleus Malificarum of the 1480s, he can spirit them away from their owners.) His evil will seems unbeatable, down to the last scene of the last chapter, but royal blood has a power of its own, and true loyalty trumps the kind that results from magical brainwashing.

Cecilia Tan is now experienced at writing short pieces that are posted free on-line as enticements for readers, and which eventually add up to coherent novels. I don’t know how she does it. I’ve regretfully had to avoid keeping up with Darron’s Guitar Chronicles (posted on LiveJournal) and an earlier saga by another Circlet Press author.

But apparently what had seemed to be lost can be rediscovered. I might still have a chance to binge-read what I skimmed past before.
-------------