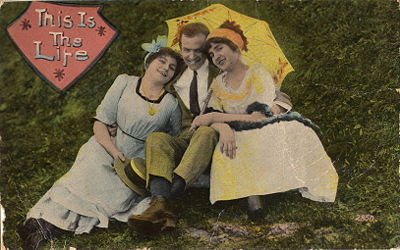 Menage. It's not someone a business owner hires to coordinate other workers. You will not find the position of a Menager (manager). Nope. Wouldn't that be an eye-opener? "The position of Menager is now available with full benefits." Heh.

Because I'm the least likely of this crowd (okay, maybe James too) to approach this subject with any kind of authority, I decided to check out Wikipedia. I can't be the only one who reads this blog with only the barest understanding of what a menage a trois is. This is what Wikipedia says:

Ménage à trois is the French term describing a relationship or domestic arrangement in which three people, often a married couple and another lover, share a sexual relationship, although the relationship might or might not involve all three persons having sexual relations with each other. The French phrase literally translates as "household of three".

On the other hand Menage carries with it all the specifics of any three people having sex, specifically, and by requirement, are in a relationship together. This definition was most enlightening:

How ignorant I was! I had no idea that a menage required a special bond between three people. I thought the bond I had seen in pieces from other authors (example: Anny Cook's Kama Sutra Lovers, Ellora's Cave-July 18th) was due to the author's preference in making a meaningful connection between her three characters. -See yesterday's Grip post- As Anny is someone who requires a deeper emotional connection between her characters to make the threeway believable.

Apparently though, there is a huge difference between a threeway and a menage. And apparently you can have a book with both! I suppose a fourway is a menage with a fourth person watching or peripherally participating... the options are endless now.

The definitions do open it up, don't they? That means if you are an exhibitionist in your sexual life, you are participating in a threeway, you soft-swinger you. I bet you had no idea.

What I find thoroughly intriguing is that the definition for Menage REQUIRES a bond between all three. We are not talking about being lose and free with a third you asked to come over. We are talking about a committed relationship of three people. Three people who are emotionally tied to one another, love one another, cannot imagine not being together and then taking those three people and joining them in the highest form of intimate contact. Changes the perspective doesn't it? Makes it less of a whispered word and more of a beautiful union.

And the difference is commitment. In the end, isn't it always about commitment? And isn't that the romance writer's code to the reader?