I have always enjoyed reading series. I like to get attached to characters, watch them over come obstacles and prevail in the end. Series such as Harry Potter, Anita Blake, and The Gunslinger have always been favorites of mine. I have even been known to stand in line for all three in hopes of getting their latest installment as soon as possible.

But that is as a reader.

As a writer, I do not have the attention span to sustain worlds, or even characters, beyond one set moment in their lives. I don't know if it's because after the first book I want them to live happily ever after, and they can't do that if I keep pulling them out of retirement and forcing them into dangerous situations. Or if it's because I am lazy and like the ready made excuse above to get out of doing it. Whatever it is, I don't see a lot of series in my future. But I hope that others continue to write them because I totally enjoy reading them. 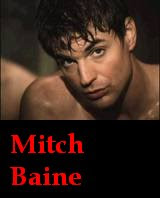 That being said, I just finished a book over the weekend (thank you ,thank you). It was so much fun to write, and I fell so in love with the men in it, that I had to promise myself I would revisit them at a later point to actually push myself into finishing. Not necessarily a sequel, but perhaps pulling one of the secondary characters out and giving her a book of her very own. I may never do this, but telling myself I could, admitting that I love Jarrod and Mitch so much that I have to check up on them from time to time, gave me the push I needed to write the last 5k of the book.

So when it comes to series I suppose I am on the fence. I love to read them, but it would take something or someone pretty special to make me want to do that much work. ;)

XoXoXo
Dakota Rebel
Posted by Unknown at 7:35 AM