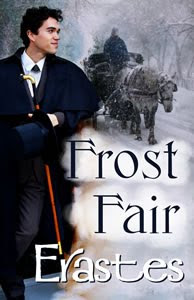 Thank you so much Getagrippers for inviting me. This wasn't a blog I'd known of before but now it's firmly bookmarked.

I'm Erastes – I write gay historical fiction and I'm rather obsessive about it. There's so much to love about ordinary historical fiction, and I've been reading it since I could read, starting with books like Treasure Island and Kidnapped. Someone once said that the past was a foreign country, but it's never seems like that to me, it always felt like home. They do do things differently there, but that's why I love it.

People have said that my books have a sense of being written "in the era" rather than "about the era" which is hugely flattering. It is something I aim for, even though I know that my style isn't for everyone.

But why do I write Gay historical fiction? Well, part of the fascination is that we know very little about how gay men lived, and managed their affections in times less recent than our own. For very good reasons—men faced imprisonment or worse right up until the 1970's, after all—men learned to hide their activities and affections from the world. When gay men died, they told their trusted friends to burn their diaries, or their precious love letters depriving us of so much written records through history. There have been gay men since Ig saw Ug from the other side of the cave and realised why he didn't fancy Ugina, but other than a few books published here and there no-one seemed to be publishing it, and therefore, no-one seemed to be writing it!

Because of this, I started Speak Its Name (www.speakitsname.wordpress.com) in 2007 – to list all the gay historical fiction I could track down, and to do reviews of the genre. It's gathered quite a few followers since its birth, has around 1000 visitors a day and is still the only place on the planet to review, list, and concentrate on gay historicals. I've more recently started up Bosom Friends (www.bosomfriends.wordpress.com) to concentrate on lesbian historicals as there is a woeful lack of those.

Six years on from when I started writing it, things are much better—there are hundreds of books on the subject and more and more people are taking up the challenge.

Do I think research is important? EMPHATICALLY YES. I've been accused of being over critical of books that have poor research or where the author simply wants to write about pretty men in fancy dress, but I stick to my guns. It's called historical fiction, and your reader will assume you know what you are talking about so making blunders like having men getting married in the Regency era (in church!) or kissing in the street – or having tea in medieval England or having your characters bicycle 100 miles in a few hours in 1919 is never going to impress me.

Everyone makes mistakes – don't get me wrong. I've done it myself – there are a couple of glaring mistakes in Standish which readers are gleeful to point out to me, but by and large, it's pretty obvious when an author has tried his or her damnedest and when they simply haven't bothered. In these days when we can find out facts in seconds rather than having to tromp to the library to find out your facts, there's simply no excuse.

The trick is—and it's not an easy thing to do—is not to dump that research on your reader. When you walk into a room do you describe every single thing? No, and unless the micro-details are important—it might be vital to describe that Spanish Chest in the corner for example – then you don't need to. "Mason walked into the room and sat in a chair by the fireside" is quite sufficient rather than "Mason entered the room with the coffered ceiling, sat in the chippendale chair by the Adams fireplace" is just going to annoy your reader after a few pages. Don't be afraid to use words of the time, but if they are likely to be a word your reader might not know, explain them in context. Here's a snippet from Frost Fair (http://cheyennepublishing.com/books/frost.html) which I hope illustrates this.

"You are a bloody cheeky cub, a veritable Corinthian," Simeon laughed. "I have always said as much. You may not take after your father in a lot of ways but you have a brass neck. Fair enough. I'll deal round with you, lad."


Gideon bit his tongue. Personally he did not consider threatening his livelihood with disaster was round dealing, but this was not the time to discuss it.

There's tons more I could say, but I don't want to go on and on. Pop over to The Macaronis (www.historicromance.wordpress.com) because there are loads of articles there on the subject!

Thanks again for having me – and please, if you were thinking of trying out a gay historical, don't be scared—give it a go, it's hard work, but hugely rewarding.