This short story came to me when I saw this photo.  For all my fans out there and my fellow authors who have become friends...Happy Holidays!  This one's for you! 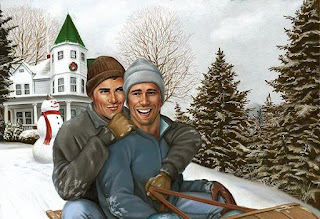 "Oh, this is just great," Garrett muttered under his breath, although there was no one there to hear him.

That was the problem. He was alone.

Alone at Christmas, what a cliche. So sappy.  Even he wouldn't write such tripe.

He gave the whirling, falling snow outside one last glare, then reluctantly gave up his vigil at the front window, conceding defeat. Mother Nature was apparently not on board with Garrett's plan to fill his home-du-jour with Christmas cheer and brotherhood. He flicked off the porch light, and the snow appeared to stop falling.  He wished.

When he first accepted this house-sitting gig over the two-week holiday period, he had gone into full planning mode. A huge Victorian inn up in the mountains over the holidays?  All "his"?  E-mails had flown as he invited all and sundry up for some playtime in the winter wonderland.

Oh, when the weather broke, he might still get a few takers. But it was late on Christmas Eve, and even though Garrett knew it was just another night, the prospect of rattling around all by himself in this monstrosity of a retreat on Christmas Day just took his knees out from under him.

Garrett sighed and began closing down the house for the night, the unfamiliar routine of this new house momentarily distracting him from his melancholy. Steeling himself to keep from going to gaze hopefully out the window again, watching for headlights he knew wouldn't appear, he ascended the staircase, letting his hand trail along the smooth wood banister.


Lying in bed, the random dancing of firelight teasing at his eyelids, Garrett could almost hear the voice of his grandma, reminding him to make his Christmas wish. What I really want, Santa can't bring, Mimi. Burying his head under the pillow, he wished anyway, then promptly cursed himself for a fool.


Normally Garrett slept like the dead, a trait that helped him immensely in his "career" as a professional house-sitter where he seldom slept in the same bed for more than a couple weeks. That night had been no different, so the abrupt awakening confused him at first as he tried to get his bearings.

The light behind the windowshades was hard to read, and he leaned up to take a look at his old-fashioned travel alarm. After eight. Merry Christmas to me.

The house had cooled considerably overnight, and there weren't even any coals left glowing in the fireplace of his bedroom. The baseboard heater creaked and clicked at him, so he knew it had kicked on at some point, but it sure wasn't helping. Quickly dressing, he hit the stairs, lured by the thought of the woodstove in the kitchen, that real heat which seemed to penetrate more than anything man had come up with.

He thought cynically of his Christmas wish the night before and pressed his lips together, taking a deep breath. Just another day, let's just think of it that way.

Two things penetrated at roughly the same instant: the haphazard pile of discarded outerwear and bags in the foyer and the smell of...coffee?

Garrett's pace quickened and he slammed the swinging doors into the kitchen open, almost getting smacked by the rebound as he stopped short at the sight of his three best friends in the world. They looked up as one from their places sipping coffee around the table, wood stove crackling in the corner, and to a man gave him the biggest, smuggest grins he could ever hope to see.

An answering grin spread unchecked across his face even as he shook his head in wonder.

My Christmas wish came true.
Posted by Stacey at 3:11 PM