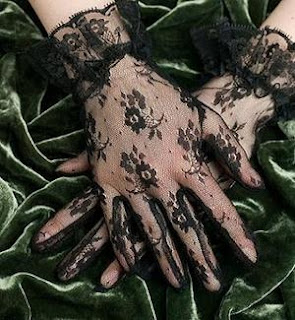 What would I wear? That was what was on my mind as the publication date for my first novel grew closer, 'way back in 1999.

I'd somehow hit the karma jackpot. My first attempt at a novel had been accepted by the illustrious Black Lace imprint - the people who published my idol and inspiration Portia da Costa! I'd been corresponding with Kerri Sharp, the editor, a seriously no-nonsense sort of person. I imagined the numerous staff of Black Lace, all toiling away on the season's titles, including mine. And I wondered whether the publisher might throw some sort of sexy, glamorous release party for all the authors.

Black Lace's address at that time was “Thames Wharf”. I thought that sounded incredibly exotic and British. I could picture the place, a converted warehouse with a glassed-in ceiling and recessed lighting. I could imagine my fellow erotica authors, all decked out in leather or velvet, short skirts or long ones with provocative slits showing plenty of thigh, wearing boots or maybe even masks. I pictured myself among my peers, sipping champagne from crystal goblets and chatting about sex and writing. I fantasized about meeting Portia in person (I saw her as an elegant, curvy brunette) and telling her how she was responsible for my success.

I had no idea how I'd afford the trip to London. On the other hand, my book had been accepted, despite the incredibly tiny odds. Who could predict what the universe might hand me next? Maybe I could finance the trip out of my advance.

Did I really expect the party? Probably not. It was just fun to think about. I had no idea, though, how wildly unrealistic my fantasy was. Looking back now, I'm pretty sure that Kerri Sharp was more or the less the whole Black Lace staff all on her own. Like most publishers, Black Lace was undoubtedly scraping by, the margins on books getting smaller and smaller each year. Money to organize a party for the authors? I'm sure the notion would have evoked incredulous laughter.

A few years later, I visited the Blue Moon Books offices in lower Manhattan. I was a bit shocked by how small and grungy they seemed. I had imagined that publishers – New York publishers – had spacious office suites, luxurious conference rooms, sophisticated, erudite, well-paid editors who decided the fate of poor authors like me. Instead, Blue Moon was crammed into half the tenth floor of a hundred year old building with water stains on the ceiling and a tiny elevator that creaked like it was going to expire on the way up. My editor was disheveled and a bit shy, almost embarrassed by the fact that he published explicit sexual fiction.

Sigh. Welcome to the real world.

Since then, I've learned that erotica authors are not necessarily all that glamorous, either. I've gotten to know Portia fairly well in the cyber-sphere. She's a lovely middle aged lady with silver-blond hair who lives in a small town with her cats, pouring her fantasies out onto the page. I've been fortunate enough to actually meet some of my colleagues from the Erotica Readers and Writers Association and the Erotic Authors Association. With one or two exceptions, there's nothing about these people that would indicate they write fiction hot enough to scorch the page. They don't wear dog collars or stiletto heels. They have bad hair days and wear glasses, just like me.

I will admit, though, that it's always a high to meet another member of the inner circle. The excitement is palpable. It doesn't matter what we look like. Deep down, each of us knows we're in the presence of a fellow outlaw, and that's intoxicating.

By the time you read this, though, I hope to have fulfilled an authorly fantasy. As luck would have it, the huge Romantic Times conference is happening in LA during the time I'm going to be visiting my sister. I can't go to the conference – don't have the time or the money – but one of my publishers is hosting a dinner for all their authors who happen to be in town, and I'm planning to attend. I can't wait to meet the writers whom I've gotten to know over the past four years of writing erotic romance. And it sounds like it's going to be quite an event.

In fact, it's not all that different from my original fantasy. It's just that it's taken a dozen years to come true.

And yes, I'm agonizing over what I'm going to wear.