Battle Hymn of the Femme Fatale 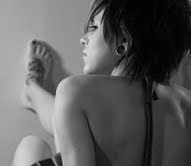 I have been marked as the Scarlet Whore of Babylon, a symbol of evil personally applied to living women.

Many of us have been damned for our sexuality, but only the powerful have become legendary sluts: Messalina of Rome, Catherine of Russia, Marie-Antoinette of France.

Millions of us were named witches. Only a few are remembered by name: Alice Kyteler of Ireland, Rebecca Nurse of Massachusetts colony.

In the nineteenth century of the Christian calendar, we were identified as Fatal Women, temptresses with cold eyes who were said to have lured many susceptible men to their death simply to exercise our power.

Most of us have been innocent of any crime. Untold numbers of women have become martyrs: tragic victims of the irrational fears of those with power in the real world. The youngest of us have been aborted while still in the womb or shortly after birth, incapable of causing harm. Incapable of self-defense.

Our innocent dead outnumber the victims of every other massacre recorded in the history books. Does this make us all collectively blameless? No.

Regardless of the theories promoted by male scholars that we have a collective soul (or none), we share a basic human condition: we are individuals. We are no more alike on the inside than we are on the outside. We choose our own actions based on our personal perception of the choices available.

If we are not all guilty, we cannot all be innocent.

Why do I do it? Look around you. How many conscientious women live happily on their own terms? As someone once said: “Women feel guilty if they assert themselves and resentful if they don’t.”

The moral codes of an unjust world are as tangled as a huge skein of barbed wire. I don’t waste time trying to untangle it. I do what I must to live as I choose.

I am not a team player. I co-operate with those who show their willingness to add pleasure to my life. I'm rational, not spineless.

Don’t tell me that I give women in general a bad name. We had a bad name in this world long before I came into it.

Call me whatever you want. You would probably slander me even if I had spent my life in the cell of a convict or a nun.

Just don’t cross me. You would be lucky if you lived to regret it.
Posted by Jean Roberta at 1:00 AM