The True Face Of Evil

I thought long and hard about this post. After all, we're talking about having sympathy for the Devil, here. Not some half-baked pretender. I couldn't go with someone easy, like that idiot at work who keeps bugging the shit out of me. He may have all the brains of a tomato stuffed with cheese, but he's not evil.

Or at least, I hope he's not evil. He did say a dumb thing for no apparent reason, and I suspect that he tosses my opinion aside because I'm a woman, but all of those things just make him a suitable candidate for a punch in the face, rather than possession by beelzebub.

No, what I really need is someone so heinous, so unspeakable, that the very thought of his name chills the bowels. My soul shrivels whenever I stare upon his monstrous visage, and the sound of his voice makes weird stuff happen like I dunno, dolphins start shitting babies or summat.

You've probably guessed who I'm talking about, by now. I mean, there's only one person it could be, right? There's only one creature so monstrous, so evil, so hideous, that he inspires such venom in me. Yes, that's right.

But fear not, gentle reader. I will not linger too long on his foulness. I promise, I won't post a picture of his grotesque personage.

Or at least, I'll promise with my fingers crossed behind my back, and then do it anyway. 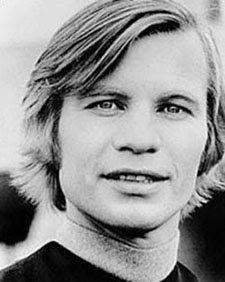 For only when Michael York sneaks up on you can you know the true nature of his evil. In all other circumstances you might shy away, but now that I've pounced on you with the full weight of Yorkian hideousness, you can truly come to grips with that weird mouth he has that kind of looks like a bum, and his nose made out of Play-Doh, and his eyes that make your skin melt just because he's looking at you.

Why is his face like that? I hear you cry, but I'm afraid there is no explanation for Michael York. He just is, he just exists, and we as a race of people must learn to live with that fact.


I'm going to take the first step. I'm going to try to find some sympathy for this beast, in my troubled soul. I mean, he must have some redeeming characteristics. Everyone knows he starred in Logan's Run, but we can't hold that against him forever.

It was the seventies. A lot of people were wearing jumpsuits and starring in terrible sci-fi. And many people have bums on their faces, for goodness' sake! Just look at Aaron Eckhart. The bum on his face is absolutely gargantuan, but no-one checks his feet for cloven hooves.

So come, brothers and sisters. Let us join hands and find sympathy inside ourselves for Michael York. He is to be pitied, not reviled. All devils are to be pitied, rather than reviled. Mock the Devil and he will flee from thee, they say.

And I hold to that, every day.
Posted by Charlotte Stein aka The Mighty Viper at 12:41 AM