The Best Wildest is Yet to Come? Maybe.

Wildest thing I've ever done? Started a bar fight with seven Hell's Angels after one of them said something rude about my song choice on the jukebox. Spent three days in the hospital with a concussion and busted ribs and I still have a couple of knife scars to remember them by.

No wait, that's not right.

The real wildest thing I've ever done? Piloted an airplane after the pilot had a heart attack. I relied on my dead steady nerves and a few years of flight sim practice and put that plane on the ground without so much as spilling a glass of champagne in the first class cabin.

You want to know the wildest thing I've done in my life? Delivered a baby on the Autobahn. My baby.

Rescued a family of four from a Yeti in the Serengeti.

Auditioned to be the voice of iPhone's SIRI and was told my voice was too sexy.

I suppose I have my share of youthful wildness. Underage drinking in bars on the Ft. Lauderdale strip (and being an extra in a couple of very bad 80s movies as a result). Riding through Coconut Grove in convertibles with rich boys I didn't know. Dating wildly inappropriate people who did far wilder things than I ever did. Having sex in cars and on playgrounds and on the living room floor of a friend's apartment while four other people slept around us. But everyone does that, right?

There's the whirlwind 1000 mile relationship with the man who would become my husband... on January 1 he was my boyfriend's roommate whom I hadn't even met yet, by October he was my husband after spending less than 3 weeks together. Is that wild? Even if it is, the story is 22 years old.

When do we outgrow wild? I ask this question with a bit of panic in my voice (fingers?). I don't want to think that my wildest moments are behind me, unless being wild is inappropriate once you're past a certain age. I don't want to be the middle aged mom being made fun of because she's being wild. (I doubt teenagers call anything their parents do "wild." I'll let you know in about twelve years.) I don't want to be the cougar dating her son's best friend. That's not wild, it's just... ick. Plus, to be honest, I will be whatever comes after cougar by the time my boys are in high school. That's what I get for waiting until my 40s to have babies. Sigh. Wait... is that wild? Having babies in my 40s? No... probably not.

Sadly, I don't think I'm all that wild. I'm a pretty responsible person (barring those youthful wild moments) and tend to make careful choices. My wildest moments are the times when I'm impulsive and make a snap decision without thinking it through in my usual careful, analytical way. I almost never regret the outcome of those impulsive moments, they just don't happen all that often--and they aren't often very wild at all. My last truly impulsive decision... well, my memory is a little fuzzy right now, but I think the end result was my second baby. See what I mean? Not exactly wild.

It's difficult to be impulsive at this stage in my life. I mean, sure, I could hit the highway for points unknown when the babysitter shows up on Monday morning, but I'd have to be home before my husband goes to work on Tuesday. Not that that's not enough time to be wild, but... well, I'm tired and I have deadlines and I can't afford to get arrested right now, okay? What would I tell my husband? Or the babies when they're older? Or, worst of all, my publisher? Sheesh. Why are you trying to get me in trouble?

This is the wildest I'm going to be, at least for the next little while. And I'm more than a little okay with that. 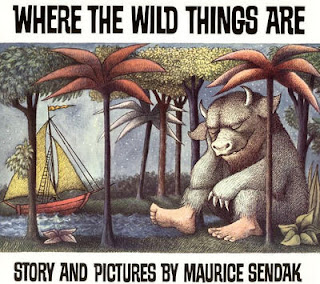 Email ThisBlogThis!Share to TwitterShare to FacebookShare to Pinterest
Labels: impulsive decisions, Where the Wild Things Are