Once again, before I start in on the subject at hand I want to give a well-deserved tip-of-the-hat to the fantastic folks here at The Grip for allowing me this little space to write about ... well, we'll get to that in a second.

A bit of background should probably be in order before I begin: I'm a writer. I write a lot of things, from science fiction to horror to mysteries to non-fiction to – let’s not dance around it – smut. Quite a bit of smut, actually.

But what's rather unique about my life in pornography ("erotica" if I'm talking to people of a 'delicate sensibility') is that I've written – and even sold – more a few stories, and even several novels, that are not in my own, sexual, 'familiar territory.'

Or, to put it another way, I've written (and still write) a lot of gay and lesbian fiction ... but I'm straight.

This (ahem) has naturally raised more than few eyebrows – straight ones as well as queer ones: how, they ask, can a heterosexual fellow write – somewhat successfully as well -- to such an orientation not his own?

I've given this a lot of thought myself, of course, a good amount of pondering. One thing, though; I want to be very clear about, is that I never, ever, tell the editors and publishers I work with that I'm gay: I'm very upfront about by own sexuality – and that they still accept me and my work is, honestly, something that keeps me somewhat toasty during those long, dark nights of the soul.

The why is much easier to answer: I'm a writer. In fact it’s way up there even above my sexuality, on my Things Important To Me list. So when an editor or publisher asks for, or a reader appreciates a story or book I've written, and for more ... let’s just say I’ll do just about anything, write just abut anything, to keep that praise coming.

After more than a bit soul-searching I have come to what I feel is a pretty close answer to how I can write gay stories, lesbian stories, bisexual stories, or kinky stories (when I say I mean I'm straight, I mean I'm straight ... to the point where I worry sometimes I'm a tad boring, sexually) – though it was an interesting conclusion, to say the least.

The thing is, you see: I don't write about gay men and lesbians.

But first, a bit more background: another odd thing about me is that I sit on another fence, but not a sexual one this time: I've edited some 25 anthologies (or more, I always lose count) and am now an Associate Publisher for Renaissance E Books – which means that I'm not just writing but I'm actually the guy on the other end buying what others are writing.

This means I quite often see other writers trying to write beyond their own sexualities – and when they succeed and, sadly, sometimes fail.

This is a large part of where my own revelation came from – that I write, more than anything, about people. It came from seeing quite a few stories and books where the author focuses – often from the get-go – on the sexuality of their character(s), especially if they are different from the author's own, which is where they too-often fail.

When I read those failures -- where the story clearly feels false, forced, staged -- where it’s painfully clear the writer has created a character that isn’t their native orientation it rings a very loud
bell in my mind: a ringing that caused me to reflect – and finally understand -- on my own work.

These less-than-successful writers, you see, were writing about differences. From the onset, they're looking at their queer characters ... and there is a big difference between looking at a character and looking through a character.

This is what I mean when I say I actually I don't write about gay men and lesbians.

I write about people.

When I sit down to work on a book or story with a queer character I try very hard to make them human beings first – with their orientation as part of their lives ... and not the only defining thing about them: I try to look through their eyes -- using my own emotional life as reference.

Sure, I may not know the nitty-gritty sexual details – I've never had a gay or bisexual experience and aren't equipped for a lesbian one – but I do know the emotional landscape of sex and desire: the fluttering heartbeat, the flashes of fantasy, the elevation of hope, the nervousness ... these are things that everyone, of every orientation or gender, feels at one time or another. These are the things that people feel.

When a writer only looks at a character they're stepping back – losing that connective humanity. When I write I always work to connect with the reader: to tell a tale that pulls them in and that hopefully allows them to see the story through the eyes of the character – and you simply can't do that by focusing on their differences.

Gay, straight, bi, kinky, straight, whatever ... it really doesn't matter if a writer remembers that behind it all is what unites us all.

Gay, straight, bi, kinky, straight, whatever ... we are people, human beings. I work very hard in my writing to never forget that -- to see their story through my own eyes as well as through theirs.

And, even more importantly, I try to see the world the same way. Down deep, where it really matters, we have an unshakable, inescapable, and – best of all – glorious humanity. 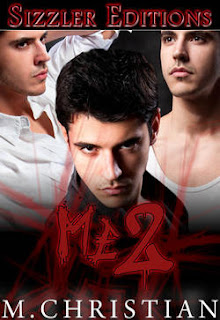 He is the editor of 25 anthologies including the Best S/M Erotica series, Pirate Booty, My Love For All That Is Bizarre: Sherlock Holmes Erotica, The Burning Pen, Guilty Pleasures, The Mammoth Book of Future Cops and The Mammoth Book of Tales of the Road (with Maxim Jakubowksi) and Confessions, Garden of Perverse, and Amazons (with Sage Vivant).

He is the author of the collections Dirty Words, Speaking Parts, The Bachelor Machine, Licks & Promises, Filthy, Love Without Gun Control, Rude Mechanicals, Pornotopia, How To Write And Sell Erotica; and the novels Running Dry, The Very Bloody Marys, Me2, Brushes, Finger's Breadth, and Painted Doll. His site is at www.mchristian.com

For a taste of the other – check out the re-release of the controversial Me2!
http://www.amazon.com/dp/B0092B8VOA/

Email ThisBlogThis!Share to TwitterShare to FacebookShare to Pinterest
Labels: GLBT, M.Christian, Me2