To be honest I don't get frustrated very often, I'm a really laid back person, easy come easy go (maybe not the right expression to use here, but hey ho!) so not much gets to me. Not to say I don't have other snarky emotions, I do, but luckily frustration isn't one of them. People changing plans at the last minute is probably one of the things that does irk me the most, but I try not to snap down the phone or grimace these days and take it in my stride and agree to the new plan.

Frustrations when it comes to publishing are few and far between. At Ellora's Cave I have an awesome editor who I get on really well with and have been working alongside for years. We're a finely tuned machine now when it comes to the writing, editing and publishing process and it's not only fun but also incredibly satisfying  and a constant learning curve.

I don't just publish through Ellora's Cave, I have other houses representing my books. I'd love to write more for them, get all the stories out of my head and onto the screen/paper but there isn't enough time in the day - that's frustrating! 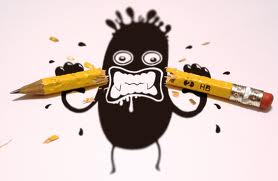 I did have one incident recently when an editor asked for something specific. So I wrote it, and then it was decided after hours of work that it wasn't the style they wanted at all. Mmm, that was frustrating, especially when I'd gone to great pains to get it reading a certain way. But never mind, I was still pleased with the end result even if I did have to go the long way round to get there.

I would say one of the most frustrating things about publishing and writing is when a bloody good book just doesn't sell. I've had a couple like this, the most recent one being Breathe You In (okay, maybe I shouldn't describe my own book as bloody good, but I love this story and self-published it because I didn't want any editors or publishers trying to change a word of it). It's frustrating when nearly everyone who reads it gives it 5*'s, and only last week I met a colleague who'd read it and welled up with emotion when just the title was mentioned and then she declared it to be a book everyone should read. So yes, I would say that's frustrating, having something that does have an impact on readers who enjoy the erotic romance genre just sitting on a virtual shelf gathering dust.

But ask the biggies, authors I mean, and some of the best-sellers have sat around for years before being noticed, so I guess there is hope for all of these books, and let's face it, if they're not even written then they don't stand a chance of being read. It all has to start with Once Upon A Time...

Thanks for reading this and I hope you have a frustration-free day.