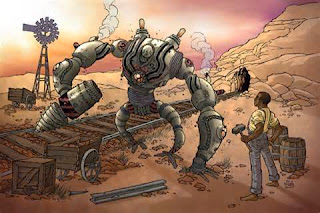 It’s hot. The sun pours in through the office windows, and there is no air conditioning in this building. I’m sitting at my typewriter, a big black Olivetti that sometimes refuses to hum into life when I turn it on. Today I’m alone in the typing pool because so many women have taken time off while they can.

Too soon, we can all take as much time as we want. The government plans to replace most of us with the machine sitting in the corner, a thing called a Word Processor.

How can a machine “process” words? Does it chop them up into little pieces or puree them like a food processor? The supervisor is pretending that the advance of modern technology (in the form of this machine that no one here seems to know how to use) will somehow make government activities more streamlined and make life better for all of us.

Well, call me a luddite. I’m not convinced.

I’ve been spending every summer in government offices since I started university, and I do so much more than type words on a page from audiotapes. I design charts, handouts, letters, and reports. I proofread, photocopy and collate. Here at federal Health & Welfare, they need copies of health information that looks attractive and readable. Someone will bring me a rough sketch with words on it, and ask, “Does this make sense? Can you put this on a sheet of paper?” I always say yes.

I’ve been told that my flow chart of the organizational structure of the whole department is widely admired. I count every line and space, then double-check my figures to make sure everything is perfectly centred. Can a machine do that? I’ll believe it when I see it.

I’m tempted to write a song to the tune of “John Henry.” Instead of a “steel-driving man,” the central character will be a key-pounding woman, with an optional chorus of “Lord, Lord.” She will challenge the damn word processor to a duel and she will win – at least in some way. And unlike John Henry, who won a race with a steam-powered drill, she won’t die of a heart attack.

They’re planning to train someone to use the word processor in the next few months. It obviously won’t be me because I’m just temporary. I usually replace someone who is away for three or four months, and those permanent members of the clerical staff will be first in line to replace everyone else.

I could be permanently locked out of the government jobs that have kept me going while I try to educate myself into a job that can’t easily be done by a machine.

Just seeing that object in the corner, looking as if it wants to push me out of my chair, is giving me shaky fingers. Damn it! A machine can’t really design anything. Can it?

By 1981, the clerk/typist jobs I relied on had dried up, leaving me to find more adventurous ways of earning a living to support myself and my child. But that is another story, or several.

For the story of John Henry, read the Wikipedia article: