An Exercise in Discussing Exercise

I have so little to say about exercise that I’m going to cheat and include a comment I made on Lisabet’s post last week on this topic. But first, to distract the reader, I’m stealing an amusing bit that’s had a workout on Facebook and elsewhere lately. 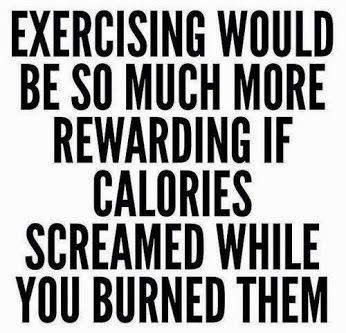 (My first thought on seeing this was that I’m glad the calories don’t scream when you eat them.)

Maybe I was born too long ago for the concept of “working out” as such to take hold in my formative years. I think the only time I've used a gym-type machine was having my heart checked on a treadmill a few years ago (it was just fine--turned out I was having muscle spasms in my back.) I think I'd be more likely to use work-out equipment if my efforts were powering something, like, I don't know, charging batteries or turning the roast on a spit in a medieval kitchen. I do exercises at home for my back, though, and take brisk walks (a mile or more) daily, weather permitting. And before I sold my retail business, I was on my feet much of the day, with plenty of stretching and bending and lifting when shipments came in (a likely cause of those muscle spasms.) I'm sure I should be doing more, but my stats are all okay, blood pressure, cholesterol, etc.

It’s not that I don’t value exercise for its own sake. My brisk mile walks are exhilarating even when they’re along the same stretch of rural road I’ve traveled hundreds of times, but when I can manage it I go farther along trails through the woods with more to see. I’d rather have exercise accomplish something beyond conditioning, like get me to the top of a mountain and down again, but I have to admit that my knees aren’t what they were in my youth, especially when it comes to the down again part, so I stick to less ambitious hikes.

When it comes to my fictional characters, though, I’m free to imagine feats that I’ve never come close to mastering. I’ve written about champion figure skaters, rodeo riders, skiers (I did ski in my relative youth, but never very well,) and rock climbers, possibly my favorites. I’ve done some scrambling up rocks, but never the technical kind of thing with ropes and pitons, although I’ve done as much research as one can by watching climbers and studying their accounts.  It may seem strange to think of an activity as generally slow as rock climbing as being exercise, but the conditioning requirements are rigorous, and muscles can work as hard maintaining balance and challenging gravity as they can running. It’s just a different dynamic. At least that’s my theory, and I’m sticking to it.

All of which is leading up to, you guessed it, a space-filling story excerpt, since really, I don’t have all that much to say about exercise. And you can probably guess the title of the story, too.

Nothing focuses the mind in the body like a vertical rockface. On one side, an infinity of air and light; on the other, the uncompromising rigidity of stone. I clung between these absolutes, toes edged into a slanting crevice, fingers jammed into a narrow crack, weight poised in utter compliance with gravity.

I had forgotten the intensity, the controlled rush; forgotten, too, the exultant surge of horniness. When I could pause on the insubstantial security of a narrow belay ledge I savored the moment. The view of the green valley with the river winding through was all well enough, but Sigri Hakkala's fine, broad, muscular butt in canary-yellow stretch fabric twenty feet above commanded all my attention.

Why Sigri? Proximity? We'd been casual friends for years, members of a fluctuating group of dykes sharing a rundown ski lodge in the valley. If she'd ever figured in my fantasies, it'd been as a mead-companion, a Viking warrior ravaging villages by my side as we bore off not-unwilling maidens. Now I found myself recalling rumors that she'd done some porn films in her starving-student days, and wondered whether her big breasts made it harder to maneuver close to the rock on overhangs. When she splayed her legs wide to reach a new foothold, I ached to slip a hand between her round, powerful buttocks and feel their strength as they clamped together again.

All fantasy fueled by adrenaline. People had been trying to throw us together all week, on the theory that the recently bereaved must want to compare notes. We'd been trying just as hard to avoid each other.

So why choose to climb together? The simple answer was trust in each other's competence. This route was only moderately difficult, iron bolts not more than twenty-five feet apart, but when you take the lead with the belaying rope and call, "Watch me," you damned sure need to know that when your partner on the other end answers, "Go for it, I've got you," she has, absolutely, got you, and will hold you if your grip fails or a rock edge breaks away and you plummet down the unforgiving cliff face.

Somewhat less simple to understand was my willingness to let Sigri lead most of the way. She'd raised a quizzical eyebrow each time as I waved her ahead. I couldn't explain to myself, much less to her, my sudden obsession with looking up at her muscular, well-padded body.

Whatever the trigger, this surge of pure lust was both agony and exhilaration, like the awakening of an anaesthetized limb.

[This story, originally published in Best Women’s Erotica 2001, deals with physical and mental exertion as a means to recovery from bereavement, as when the main character muses that “Each precise, careful shift along the cliff from hold to hold said, ‘Yes!’ to life. The rough scrape of granite against hands, knees, chest, drove home the stark reality of the flesh, and its capacity for extremes.”

And, incidentally, the characters do go on to indulge in some vigorous calisthenics of a sexual nature, though not while still on the rock face.]