Back to the Future


If you follow my Donuts & Desires blog, you've probably gathered that I'm currently on vacation. In the woods. Away from the internet. So I'm writing this blog post in advance of my departure.

There's something a little odd about reflecting on nostalgia for a post that's going up in the future.

Never mind. I'm over it. 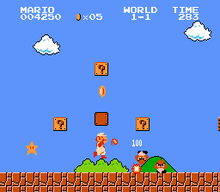 Seeing as I'm the Grip baby, I won't be shy about telling you that the first thing popping into my head right now is "Super Mario."  To me, Nostalgia is Super Mario.

I've never been coordinated enough for video games, but Super Mario Bros. still holds a warm place in my heart. Christmas of 1980-something, Santa brought us a "family gift--a present for everyone.  Yes, it was a Nintendo Entertainment System, complete with a Super Mario Bros./Duck Hunt game cartridge. Our lives changed in an instant.

Okay, that's a bit of an exaggeration, and to tell you the truth I don't even remember unwrapping the gift. What I do remember is coming downstairs on Christmas night, after we kids had played all day, to find my parents sitting on the floor in front of the TV. They were playing Super Mario. It was the sweetest thing I'd ever seen.

Because I didn't grow up in a house of sweet moments.  It's pretty amazing they could afford that gift at all, though, thinking back, we had money when my father wasn't binge-drinking.  When he was, we didn't eat. No, that's an exaggeration too.  Dinner would be one can of Campbell's soup, or one box of KD. The sad thing is, that seemed totally normal to me.

My home wasn't always a safe place to be, and most of my memories of my parents' interactions end with my mom fake-calling the police. (She'd hold down the thingy on the receiver while she dialled 911 and have a pretend conversation into the phone.)  My father would always be too drunk to catch on, so he'd lock himself in the bathroom.

Except sometimes the police actually came, so I guess not all those calls were fake...

No wonder that one moment of Super Mario-related peace defines nostalgia, for me. I think it's the memory of my parents laughing together and, in a sense, collaborating instead of warring with each other that makes the thought so beautiful.

My father died when I was in my twenties. By then, I hadn't spoken to him in over a decade. I don't regret that choice. From what his landlady told us after his death, sounds like he didn't change much. So I hold on to this one memory as the cream of the sludge. It's good enough for me.