I like writing in various genres. Like Annabeth, I'm squeamish about talking about a work-in-progress, or something I seriously plan to write in the near future, so I won't describe the book I discussed recently with a local publisher. The more distant future is a different case. I think it's useful to have a set of possibilities on paper.

For years, the Phantom Book (series of articles?) in the back of my mind was the true story of how I was treated by my family and the “mental health" profession after I tried to commit suicide after being raped at age nineteen in my dorm room in a Canadian university in 1971. (For the record, I had had consensual sex with the guy before. On the day of the event, I agreed to go to the cafeteria with him for coffee and a conversation about our relationship. I didn’t invite him to my room.)

The first male psychiatrist to whom I was assigned (as far as I knew, I had no choice) told me I had not experienced "real rape." A psychiatrist in my home town diagnosed me as a “borderline schizophrenic.” I was told that I was rebelling against my parents because of being the youngest child in my family (I was actually the oldest, and this hasn't changed). Apparently my parents were told I was on drugs. (That must have been some good stuff – I wasn’t even aware of having taken/smoked/injected any such thing.)

At this point in my life, I don’t think I will write that book. I still have relatives who would strenuously discount everything I have to say on grounds that I have always been mentally ill. They would point out that no one was ever legally charged with raping me, which presumably proves that it didn’t happen. I don’t know how my relatives could affirm that I was acting out because of youngest-child syndrome; they might just insist that I caused a lot of trouble for my good parents.

The people I would have liked to sue for professional misconduct at the time must be retired by now, and some are probably dead, as are both my parents. I have nothing to gain by writing the book except the satisfaction of seeing my truth on paper, and that might be outweighed by the drama that would result.

Luckily, I have other writing projects in mind. I know I won’t have time to tackle all of them until I retire from teaching, and maybe not even then. I also don’t know if any of the books on the following list would be publishable, but writing them would certainly give me something to do. Note that this isn’t a complete list.

I (female narrator) came to earth from another planet or alternative dimension in which human females function much like other mammals: we go into heat on a regular basis, and no one blames us for that. Applying ugly labels to females in heat would be like blaming them for eating food. (And who does that?) We form relationships (one-to-one or multiple), and relationship-sex usually feels different from heat-sex, but everyone on my planet knows that women occasionally need to have it with whoever is handy.

I know that human females in this world are assumed to be much different from me; in fact, some are brought up to believe that any sexual feelings they might have are a personal problem. Luckily for me, some humans understand how my tribe functions.

I’ve gone to a job interview, suitably dressed for an office job. Unfortunately, I’m in heat. The more I try to ignore or suppress it, the hornier I feel. After squirming in a chair in the waiting area for awhile, I am shown into the office of the head of Human Resources. He is a man in a suit who sounds Canadian but looks more-or-less African. He knows what it feels like to be outside the cultural mainstream, and he clearly prides himself on his knowledge of cultures outside his own. He can see at once that I am likely to be distracted during our interview if I don’t get some relief first.

Mr. Suit asks, “Is there anything I can do for you?” This is the traditional phrase used by my tribespeople to offer sex to a female in heat.

I say something like, “Oh goddess, yes.” I tear off my clothes while Mr. Suit does the same. He has a sofa in the corner, and he has a supply of condoms in a file cabinet. He lies on me, but he is not too heavy, and I’m grateful that he doesn’t tease me too long before sliding his very erect cock into me. Apparently my condition triggered an instant response in him.

Neither of us has all day to spend on this activity, so as soon as we have each come once, we put our clothes back on. He returns to his desk, and I return to the visitor’s chair in front of it. We proceed to discuss the job description and my qualifications. He promises to let me know the outcome, one way or another.

I have been volunteering at the local women’s centre which runs the sexual assault line. I find the idea of sexual assault (especially when males assault females) to be incredibly gross, partly because it makes no sense. I go into the centre on my usual day, about a week after my job interview. The co-ordinator of the volunteers asks how my day is going, and I say, “disappointing. I just learned that I didn’t get the job.”

Co-ordinator asks what I applied for, and where, so I describe the job interview. She is appalled that I was “sexually abused” by a man who seems to do this regularly to vulnerable job applicants. I point out that I was in heat. She interprets this to mean I was so desperate for the job that I would consent to anything. She advises me to contact the local Labour Standards Board to complain that Mr. Suit violated several rules of the game by coercing me into sex by promising me a job and then breaking his promise.

I am aghast. I tell Co-ordinator that making accommodations for people who are different from oneself is the height of professional behaviour, and I certainly wouldn’t want Mr. Suit to be removed from his job. In my experience, there are too few like him. I explain that one of the other job applicants must have had more impressive qualifications than mine -- and this is not a double-entendre.

Co-ordinator tells me that I need to raise my self-esteem and learn to assert myself. She points out that I have to stop worrying about being accused of racism every time I refuse inappropriate sexual advances from a “person of colour.”

If I hadn’t lived in this world as long as I have, I would have no clue what Co-ordinator is advising me to do, or why.

I really want to educate her. She really wants to educate me. We both want this to happen as soon as possible, for the good of the other person. I realize that she will never understand me until or unless she experiences heat herself. Can I help her with that? I need to try.

This would be a historical novel about an American heiress of the nineteenth century who was (and still is) widely considered “eccentric,” if not batshit crazy. I think she needs an advocate, or at least a reconsideration.

Sarah Pardee Winchester (1837-1922) was married to William Wirt Winchester, heir of the Winchester Repeating Arms Company, founded by his father, Oliver Winchester. The “Winchester” was said to be the gun that “won” the West. As a rifle (a long-barrelled gun with spiralling grooves inside the barrel), it had a more accurate aim than those of the muskets of old. As a repeating rifle, it could fire more bullets in a short time than previous firearms.

In short, the “Winchester” was probably the deadliest hand-held weapon of its time.

Sarah had a baby girl who died within weeks. She was grief-stricken, and didn’t conceive any more children. Oliver, her father-in-law, died in 1880, followed by her husband, W.W., in 1881. This left Sarah with a fifty-percent share in a very lucrative company. She suddenly became one of the richest women of her time. And possibly the loneliest.

In 1884, Sarah moved from the industrial East to the area of what is now San Jose, California, bought a farmhouse on an acreage, and hired workmen to renovate it. According to legend, she believed that if work on her house ever stopped, she would die. Eventually, the house came to have 160 rooms, staircases that lead nowhere, and doors that open onto walls.

Sarah is said to have been too influenced by late nineteenth-century spiritualism, and a belief that the money she inherited was cursed by the spirits of all the people who were killed by Winchester rifles. Supposedly, her house was intended to be a maze to outwit the angry ghosts.

Would you feel like a member of the deserving rich if you suddenly inherited a fortune that was raised by the sale of a very efficient killing device? I wouldn’t.

The Winchester House has been a tourist attraction for years, but as far as I know, no one has written a novel about the mistress of the house. It seems overdue.

During the “burning times” or the “witch craze” (approximately 1480-1700), accused “witches” were said to be required to kiss the Devil, their Master, on his dirty bum, presumably under his tail. Was this “kiss of infamy” a euphemistic reference to something else? 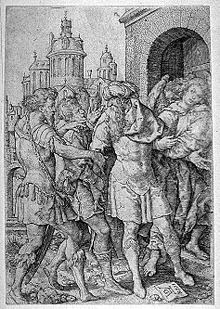 When my daughter Liz was a baby, I thought of compiling a Book of Elizabeth, including brief biographies of all the famous women I could find who had that name. I still think this would be an interesting research project, with a ready-made audience: all currently-living Elizabeths, and their friends and relatives. The current Queen of England is an obvious example, along with her predecessor, Elizabeth I, as well as the late Elizabeth Taylor, but did you know that “Mother Goose” is claimed by some to have been an actual woman, Elizabeth Foster Goose (1665-1758) of Boston, Massachusetts? (Actually, this claim is doubtful. References to “Mother Goose” stories and rhymes for children occur as early as 1590, and several French writers wrote “contes de la Mere l’Oie” in the 1600s.) Elizabeth Fry (1780-1845), Quaker reformer of the horrendous English prison system of her time, and Lizzie Borden (1860-1927, American woman acquitted of killing her father and stepmother with an axe, but widely believed to have been guilty), are easier to trace. The list could get very long, especially if it includes imaginary and generic characters. ("Outside, Eliza!" was a term used in the Victorian age to get rowdy women out of pubs.)

I have several stories and a novel (Prairie Gothic, written in 1998, available as an e-book from Amatory Ink from 2002 to 2006, when the publisher folded) that need some revision and updating.

The fall semester at the university where I teach is approaching like a speeding truck. If I seriously want to tackle at least one thing in my TBW pile, I probably need a sabbatical and a set of deadlines.