Maybe I've told this story before. In fact, I'm sure I have in one way or another. You know by now my girlfriend is trans. You also know she's not out with her family. With them, she presents male. That's how she looked when I met her.

We didn't take much notice of each other until we fell into conversation. I noticed she took particular interest in gender and gender identity. In fact, she brought up trans topics so often I thought she was a trans man for a while.

She tested the waters with me by saying she looked good dressed as a woman. She didn't come right out and tell me she was trans.  Even though she knew I had a lot of trans friends and acquaintances, she still didn't know if she could trust me.  She didn't want to lose the friendship we'd built.  She couldn't have known, back then, that I don't hold myself at any one end of the gender spectrum. I'm not sure I could have articulated where I was coming from, but I think our individual journeys with gender brought us closer.

I can tell you everything about the night I met Sweet presenting as a woman. Every detail.

I'd been out with a friend and came home to about 16 voicemail messages. First, Sweet was inviting me to a movie. Then, as it got later, "Maybe we could get together. I just want you to SEE me." To this day, Sweet never thinks to call my cell phone. She'll just leave a series of messages at my home number.

We live in different cities. It wasn't exactly a short drive. She didn't knock at my door until one in the morning, and when I opened up it was to a striking redhead wearing a long green skirt, short-sleeved blouse and sandals. I can see her in my mind. I can see the scene so easily.

"This is ME," she said. And I knew what she meant.

That's when the spark happened. That's when I fell for her. I don't want it to seem like it was necessarily her physical appearance that changed things so much. It was more like an unveiling. She wanted me to SEE her, and I did.

****
Just a quick heads-up that my latest release has just hit the market, and it's HOT! 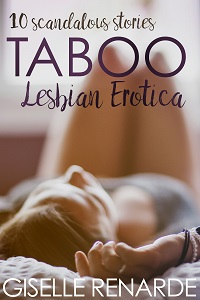 It’s forbidden. It’s wrong. You know you should resist, but the desire is too strong…

In Taboo Lesbian Erotica, kittens and cougars can’t fight their illicit urges. Their lust for someone off-limits is impossible to shake. What can they do but surrender to temptation? Especially when temptation comes in the form of discipline, punishment and scandalous sex with a woman who’s absolutely forbidden!

Ten shocking stories of women who can’t say no to scandalous sex!

TABOO LESBIAN EROTICA is coming soon to other vendors
Posted by Giselle Renarde at 12:57 AM