more books in the bag

Since I get to post on Friday, I have until Monday to add another post(script). I think.
I just thought I would add the list of books I’ve read lately that I promised to review.

Zander Vyne’s Tales of a Vampire Hunter Omnibus Collection (Books 1-3) is a thrill ride in which vampires (infected with vampirism) and hereditary vampire hunters are sexually attracted to each other, but their encounters are likely to be deadly for someone. A Romeo-and-Juliet pair from opposite sides who don’t kill each other have to run from their numerous enemies, so these 3 volumes (Immoral, Depraved, Bespelled), packaged together, are a road-trip saga. I’ll say more when I’ve finished a review. 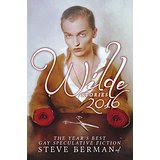 Wilde Stories 2016, edited by publisher Steve Berman (Lethe Press) is an annual anthology of the year’s best gay-male speculative fiction. Some of these stories are literally haunting, and many deal with the loneliness of sensitive teenage boys on the brink of realizing what it is that makes them unconventional. All these stories were originally published somewhere else, some in Strange Horizons (magazine), which actually pays for reviews of 1-2K. So I wrote a long review of Wilde Stories, mentioning themes and motifs, and sent it to them. I haven’t heard back. Wish me luck. 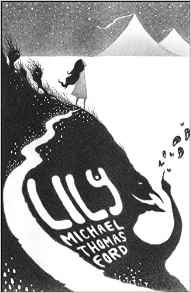 When Steve Berman sends me a gift package of books for review, it usually includes more than I asked for. Along with Wilde Stories, I got Lily by Michael Thomas Ford (Lethe Press), a charming coming-of-age lesbian fantasy story in which Lily, a girl who can see other people’s deaths when she touches them, is taken away from her enchanted seaside home by her mother after the death of her fisherman father on Lily’s thirteenth birthday – which she foresaw and for which she feels horribly guilty. She doesn’t object when her mother agrees to join a travelling gospel show from Hell because Lily hopes to be cleansed of her “sin.” What she really needs to do is to rescue a more desperate prisoner and bring her home. The debunking of Christian piety and the regular appearances of Baba Yaga, the traditional Russian witch in a house on chicken legs, are delightful. And the illustrations are as good as the narrative. 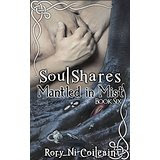 Mantled in Mist by Rory Ni Coileain (Riverdale Avenue Books) is one of the novels I agreed to judge for Elisa Rolle’s Rainbow Awards. It’s the sixth novel in the “SoulShare” series of m/m erotic romances about glamorous male Fae from “the Realm” who must keep a shapeshifting monster (the Marfach) out of their world while each of the Fae must find his mortal, human soulmate. The sex is sizzling, and the dialogue is both witty and full of Gaelic, which is translated for the non-Irish reader. I was especially amused by the scene in which our hero, Fiachra, is hurled by the pissed-off spirit of an oak tree in Scotland to Central Park in New York, naked and with acorns rolling off him. The plot is both fast-paced and convoluted, but if you read carefully, you can follow it. I assume that anyone who reads this novel for pleasure would probably want to read the previous five volumes first.

Hadrian’s Rage is a novel I should have reviewed months ago, but I couldn’t open the digital versions sent to me by the author, so I ordered a paperback from Amazon. It’s definitely worth the price. This is a sequel to Hadrian’s Lover, a self-published novel by Patricia Marie Budd, a high-school teacher (who was exiled from her home in Fort McMurray, Alberta, when the place was ravaged by fire in summer 2016) about a post-apocalyptic nation, Hadrian (in the former Canada, bordering on Hudson’s Bay), which is protected from the rest of the world by a wall, and where the founders decided that same-sex relationships must be enforced by law to keep the population stable. Their reasoning is sound: since heterosexual males have caused most of the world’s problems, including overpopulation and the rape of the earth, they simply must be stopped, and women must not be allowed to mate with them. Of course, trying to police human sexuality causes problems. I’ll write a review a.s.a.p. My review of Hadrian's Lover is on Goodreads. Both books are constructed as newscasts, reports from judges, military officers, psychologists and other experts, and short third-person summaries. It's a very effective way to build credibility, and luckily, the second novel is much better copy-edited than the first.