Ah, Fads. Here in Australia (and my brief spot of research suggests ONLY in Australia), we have these silly little lollies. Or candy, as our good friends in the US of A call it. 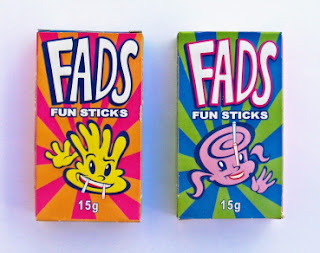 No, I've never eaten them...but I know exactly how they taste!

"What?" you cry? "Madness!" you exhort. "Are you some kind of knucklehead?" you suggest, somewhat boorishly.

No, I strongly refute at least two of those questions/statements.

Because Fads, when I was a kid, were known by a slightly different name. 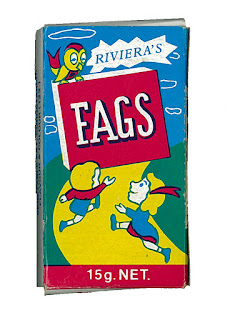 Yup. Here in Australia, we used to give our kids Fags to put in our mouths. And they were tasty. Not only that, but they were just about the coolest lollies around.

"Why?" you enquire, near breathless with boredom anticipation.

Because "fag", in Australia used to be the slang term for "cigarette".

Here in Australia, up until the early 90's I believe, we were still selling our kids candy cigarettes, with a name which even primary school kids knew had homophobic connotations.

None of this really has anything to do with writing, I realise. I'll just have to live with that...
Posted by Willsin Rowe at 7:06 AM