Wanted: Writing Partner A Story from the distant past 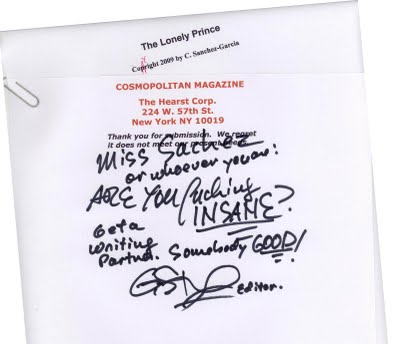 By C. Sanchez-Garcia
Once upon a time there was a wealthy and handsome Prince. As his last dying wish the King asked the Prince to find a beautiful Princess and be married and have children. The Prince traveled to the Kingdom of Whiz and asked the Princess Margarita to marry him. Now Princess Margarita was the most clever and beautiful woman in all the world, without peer. "Fuck you!" she said I wouldn’t marry you if you were the last asshole Prince on earth. I'd rather marry a magic frog!"

The King died and the Prince became the new king, but still the lonely Prince had no wife. So the poor, unmarried Prince spent all his time and his money any way he wanted and went hunting and fishing with his friends as often as he pleased and took yoga and gourmet cooking classes, and studied American literature and poetry and made wild love with hundreds of exciting and interesting women from all over the world and lived happily ever after.
The End

By Ernest Hemingway and C. Sanchez-Garcia

The prince stood outside the King's chamber. He knocked on the door. There was no answer. He knocked again. He's in there all right, thought the Prince. The King opened the door and the Prince went in.

"You must get married." said the King.

"I want to be a bull fighter." said the Prince.

"There aren’t any bull fighters’ anymore." said the King.

"There is a Princess in the Kingdom of whiz. She's all right."

The Prince left and the King shut the door after him.

In the Kingdom of whiz the Prince was introduced to Margarita. It had been a hot day. He had walked. It had been a good walk and he was not ashamed. The Princess was in her room with her chambermaid. "What do you want, bright boy?" said the Princess.

"He stinks." Said the Chambermaid.

"She says you stink, bright boy." Said the Princess.

"My father says I should be married." Said the Prince. "You have a sweet can."

The Prince shrugged. He lit a cigarette, but did not offer one. He waited for her.

"I am having an affair with a bull fighter." said the Princess. "Juan Belmonte."

"He stinks too. All men stink." said the Chambermaid.

"So tell me, bright boy. Why the hell would I marry you?" said the Princess.

"You might be good with a husband." said the Prince.

"I wouldn’t." said the Princess.

"He stinks." said the Chambermaid.

"You're a funny guy, bright boy. Still think I have a nice can?" said the Princess.

"Take off, bright boy. That's the way I want it." said the Princess.

After the king died, the Prince took up fishing. He had no luck in him for the fishing. He was a Prince who fished off the Gulf in a yacht and had gone eighty days now without taking a fish. He went lion hunting in Africa and shot a 500 pound male on the third day. "Damn fine lion." said the Prince over a whiskey and soda.

By Ray Bradbury and C. Sanchez-Garcia

"Run! Feel! Dash! Live! Feel your life slipping through your fingers - feel it damn you."

"When I was your age, why I had conquered half the world!" The old King slapped his knotted oak knee with a mahogany hand. His ancient eyes glowed in his skull like a Jack A lantern. "The Princess of Whiz is waiting. No - pining! Go to her before her heart beats another beat!"

"I don’t see the rush." said the Prince, with a sigh of October leaves blowing down midnight streets. “And I’m shy.”

The old king was no longer listening. Skinny skeleton fingers were snaking like spiders through a wooden steam trunk. "Ah! Ah ha!"

A pair of ratty black sneakers dangled from his fingertips. "There you mayst behold child, the enchanted sneakers of Merlin. See! Wings for your feet. These are the shoes that bestow - invisibility!"

"But to do so you must be naked! It will not make your clothes invisible, only you yourself."

But could this be? To be invisible as midnight smoke, to pinch pretty girls bottoms, steal apple pies from farmer’s windows, steal the sleep from eyes of maids, sneak through windows like a succubus.

The Prince dropped his clothes, naked as the sun and naked as the moon. He tied on the sneakers and held up his hands waiting. "How do I look?"

The King spun like a top. "Where are you, child? Where have you gone? You've vanished! Oh, it reminds me of the old days!"

"I'm off, Father." Said the naked and lonely Prince. The magic sneakers of Merlin carried him over hill and dale with the sound of green grass and the rush of summer running.

The Kingdom of Whiz - and there! The Princess' open window. He climbed in.

The Princess was alabaster and soft vanilla ice cream.

"It is I!" cried the Prince. "Come to sweep you off your feet and be my bride!

"You're much deceived." said the Prince. "I'm invisible. You can’t see me."

"I see the white of your eye, the bats in your belfry, the lust in your heart. And - oh my." The Princess gazed at his mighty organ. "You're a loony. But you're hung like a horse."

"I'm invisible!" said the Prince, stamping his bare foot. "All you hear is my voice."

"All right," said the Princess doubtfully, but taking the measure of him with growing excitement. "What would make you visible?"

"Uh . . . a kiss!" His Father hadn't said so yet the Prince felt it to be true. The Princess's gaze stirred his manhood so fiercely the Universe seemed to crouch like a black cat.

"Is one kiss enough?"

"Try." Said the Prince. He stepped to her and held out his arms. She touched her lips to his.

The Prince became afraid. "Only my head?"

"I think I have to kiss you for each part to be visible."

She kissed his hand.

"I see your arm!" She kissed his other hand, noting his mighty manhood had become extremely visible and had begun to radiate heat like a desert wind. "I see your other arm." She kissed his chest. "I see your chest." She dropped to her knees and clasped him around the waist. She kissed his leg with hummingbird lips. "There's your leg." With the rasp of a tigress tongue she kissed the other leg. "And there's its fellow."

"Don’t leave me this way." he pleaded.


"It’s better to be invisible than only half visible." She kissed his feet.

"Am I visible yet?" The Prince staggered, silver stars and crimson flowers bursting in his fevered brain. "I'm going to explode! Burst like lightning, all hell fire and fourth of July thunder!"

"Only the middle is left to be kissed." she said. "Lay down over there and we'll take care of it now." He lay on the bed and the Princess dropped her clothes on the floor. She completed the process of restoring his visibility on the bed though she lingered much longer over the middle than the rest of his body. Complaining how the Prince kept undoing her work and becoming invisible she repeated the process over and over and lived happily ever after.