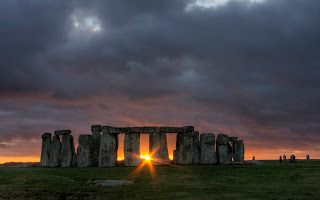 (The Winter Solstice at Stonehenge)

“A fire is burning. The long night draws near. All who need comfort are welcome by here. We’ll dance ‘neath the stars and toast the past year, for the spirit of Solstice is still living here.

"We’ll count all our blessings as the Mother lies down, with snow as her blanket, covering the ground. Praise to the Mother and the life that she brings. She’ll waken to warm us again in the spring.

"The poor and the hungry, the sick and the lost, these are our children, no matter the cost. Come by the fire, the harvest to share, for the spirit of Solstice is still living here.”

- “The Solstice Song” by the Wyrd Sisters, who live in Canada.*

This is the song I thought about singing – but didn’t – at the wiccan Yule event that Mirtha and I attended yesterday evening. The priestess explained the significance of Yule as we sat in a circle with candles in our hands, then we shared a delicious potluck meal, including seasonal cookies and cakes.

Two women read a story about fairies learning for the first time that the Sun King dies at Solstice, but then he is reborn as a baby. The fairies look forward to playing with him as he grows.

A man wearing chain mail under a red cloak, with an impressive crown of antlers over a wreath of evergreen leaves and berries, sang a song to the tune of "Santa Claus Is Coming to Town." It was about Odin’s Wild Hunt, how he "sees you when you're sleeping, [and] he knows when you're awake," and how you can’t escape, but it’s fun if you try. (This was a refreshing contrast to the sound of the original heard endlessly in every shopping mall.)

A boy played “The Holly and the Ivy” on his violin, while walking around the makeshift altar. He looked quite young, but played with skill. After I recognized the melody and we discussed the symbolism of holly and ivy (male and female plants), the boy was persuaded to sing the first verse.

The priestess asked several times if anyone had any other song or poem to share. I whispered to Mirtha that I would sing “The Solstice Song” if she would join me, but she said she didn’t know it, and couldn’t follow my voice because it is higher than hers. So I didn’t sing.

Later, at home, I sang it to her, and I was glad I didn’t try singing it for a larger audience without having practiced beforehand. As Mirtha noticed, I sounded a bit flat. I sounded much better in my own head. The song actually sounds best in three-part harmony, as the Wyrd Sisters sing it. I'll think about practicing it for next year -- or better yet, coaxing two other women to sing it with me.

*Several years ago, when the first Harry Potter movie was being produced by the Time-Warner company, the three-member band, The Wyrd Sisters (from Manitoba, the closest Canadian province to the east of me) approached the film company about the name of the Wyrd Sisters in the movie. They wanted a written sign to appear somewhere, saying, “The real Wyrd Sisters live in Canada.” The company refused, and the group of Canadian women had no chance against the army of lawyers that Time-Warner could afford. If you look them up and hear them on Youtube, you can see why they are a legend on the Canadian prairies.

The wiccan event was held in the cozy basement of the Unitarian Centre, within walking distance of the house I share with Mirtha. (But we didn’t walk because it was dark and we were bringing meatballs, chicken wings, and a beet dish.) The place was very familiar to me because my late parents were Unitarians. I felt at home.

Outdoors, the temperature was perfect. It hovered about 0 Celsius (or 32 Fahrenheit, the point at which water freezes). It wasn’t uncomfortably cold, and the prairie air felt the way champagne tastes: crisp and sparkling. The full moon blazed in the dark sky.

I sometimes wish I could honour the longest night of the year by hibernating like the local prairie dogs and coyotes. Silly squirrels can be seen running up and down trees and even across streets, but they haven’t always lived here. When I first moved to the prairies with my parents in the 1960s, there were no squirrels here. Like them, I have to stay awake all winter, and I sometimes feel as if my job forces me to run in circles for the amusement of students who can’t understand what I squeak at them. Luckily, I get a break from the classroom until January 8.

Happy holidays to all.