Discovering a New (To Me) Author

I did something recently that I haven't done in a long time.

I read a book from start to finish. Like, a real book. It had a plot and everything.

Lately, like for the last year or so, I've been reading next to nothing. When I pick up a book, I get halfway through and then it becomes a slog or there's something else wrong with it.

(I've recently decided I've had it with my favourite thriller writer, James Rollins, because of his habit of "burying the gays". When I hit the mid-point of the book I was reading and saw that one of the villains is gay and his boyfriend is also a villain, I knew they would end up dead by the end of the novel, as do all gay characters in Rollins's book. I may have been wrong, but I stopped reading.)

So I've been, like, disillusioned with books. I've had one disappointment after another.

And then Chase Connor, a gay young adult / new adult author I'm connected with on Twitter asked me to read his book. I admit that I very reluctantly took it. Though I self-publish and I run a small publisher, I've found that whenever someone asks me to read their self-published or small-publisher-published book, it's always a disappointment.

Was I ever fucking wrong.

A Surplus of Light by Chase Connor is a beautiful, touching, moving book. 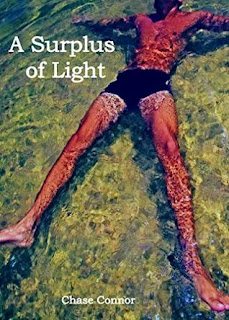 Mike is told to stay away from Ian, the boy in school who is a badass, a danger, a psycho. But there's something about Ian that makes it so Mike can't look away. It might be the way he protects the smaller and weaker kids. It might be the art that he draws. It might be the quiet contemplative mood that seems to settle around Ian all the time.

Mike isn't sure of what his feelings for Ian are, but he knows he wants to get closer. And in time he understands that he is deeply attracted to Ian.

Ian, though, wants Mike to keep his distance. Ian is into Mike, that much is clear, but he won't let down his walls and Mike doesn't know why.

To make the matter more complicated, Ian will only let them meet and hangout in the woods by the stream in the long, hot days of summer. Once school rolls around, they have to pretend that they don't know each other. Ian swears it's for Mike's safety.

What follows is a series of summers -- long, hot, bright days and the cool evenings in the stream that runs through the woods. Mike and Ian explore both themselves and each other. They challenge each other.

This book is rather light on plot, but it's deep on theme and mood and emotion. I couldn't put this book down. Not only did I discover a fantastic new author that I love and not only did I make a new Twitter friend, but with this single book, Chase has renewed my faith in reading and my faith in self-published and small-publisher-published books.

And if I can do a little bit of extra promo for the fantastic Mr. Connor, he has a new book that comes out today -- The Gravity of Nothing.

Cameron D. James is a writer of gay smut. His most recent publication is the (surprisingly smut-free) gay YA romance, Gay Love And Other Fairy Tales, under his YA pen name, Dylan James.
Posted by Cameron D. James at 5:00 AM