This month's promo post is shamelessly seasonal but with a slice of feminist history thrown in. 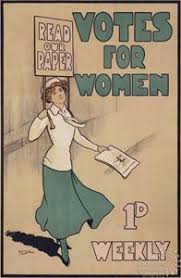 Exactly one hundred years ago today, 1 December 1919, Lady Nancy Astor became the first woman to take up a seat in the British parliament. Although not connected herself with the Suffragette Movement, she was far posher than most of them, Lady Astor's ascent to political power was a direct result of that struggle, and every female MP who has come after owes her place, in part, to the women who fought and sometimes died for the cause.

When I was invited to contribute a story to the anthology which is currently sitting at #1 on Amazon, Once Upon A Christmas Wedding, and mindful of the anniversary looming, I couldn't resist setting my story against the backdrop of the Suffragettes.

The title of my story, Deeds Not Words, was the slogan of the Women's Social and Political Union, and still has resonance a century later.

Do you love a Christmas romance? And weddings?
Grab the mistletoe and the confetti! You're in for such a treat.

Twenty-seven lovely historical romance authors, including me, have come together to create a collection connoisseurs of sexy romance won't want to miss. Once Upon A Christmas Wedding brings you 27 heart-warming, sensual romances, all set against a backdrop of the festive season.


'Tis the season... for wedding bells!
But, the path of true love never did run smooth... as our brides and grooms soon discover.
From the snowbound Highlands to candlelit ballrooms, follow our fearless heroines as they scorn etiquette and defy danger in pursuit of their heart's desire.


Here's an excerpt from Deeds Not Words. Enjoy.


“Clarissa is in Holloway. Again.” Victorine sniffed her disgust and reached for the butter knife. She regarded her brother with a disapproving gaze as she slathered her morning toast. “That girl is a menace, and I hold you responsible.”
She had him at ‘Holloway’.
James narrowly avoided showering his half-sister with coffee and settled instead for a fit of helpless coughing as he fought to clear his airway. When, at last, he felt sufficiently restored to reply, he glared across the breakfast table.
“Holloway? Clarissa? What the devil for?”
“What do you think? She’s been keeping bad company, got in with those monstrous women. The ones who set fire to innocent folk’s property and attack decent, law-abiding people. We could all be murdered in our beds. The girl deserves locking up, along with the rest of them.”
“What on earth are you babbling about? Clarissa wouldn’t hurt a fly. She’s too tiny for one thing. And never has her nose out of a book for another.” He checked his copy of The Times for stray coffee stains, then folded the newspaper neatly, relieved to note that he hadn’t made too much of a mess when his half-sister saw fit to drop her ridiculous bombshell. “Now, if you’ll excuse me, I have matters requiring my attention.”
He made to rise. Victorine was never especially pleasant company, but this morning she seemed more than usually waspish. James often found it difficult to credit that they had shared the same mild-mannered father.
Victorine’s mother, Sophia, had been Edmund Smallwood’s first wife. She had passed away following a particularly virulent dose of influenza when Victorine had been just seven years of age. Edmund had observed a suitable three or four years of mourning before remarrying. His second wife, Alice, was quickly pregnant, and James had made his appearance within a year of their marriage. For as long as he could remember, Victorine had bitterly resented her father’s second marriage. She made no secret of it. James’ mother had spent most of her married life dealing with the barbs and hostility hurled her way by her stepdaughter. For the most part, she managed to rise above it. She was Viscountess of Smallwood, and there was nothing Victorine could do to change that, however much she might wish to. James, too, had learned early in his life that Victorine was best avoided, and failing that, ignored. As an adult, he barely tolerated her, but blood was blood. She was his half-sister, and in truth, Smallwood Manor was her home, and she had nowhere else to go.
He gathered up his newspaper and briefly considered the sanctuary offered by his study. No, with Victorine in this mood he would do better to put more distance between them. He had not intended to go into his office today, but perhaps he might find a reason to drive into Town, after all.
But Victorine was not finished. She fixed him with one of her withering glares and continued her tirade. “Wouldn’t hurt a fly? That’s what you think. You’ve been away too long, James. While you were gadding about in America, your cousin was busy miring the lot of us in scandal. She was thrown in jail for a month last year, but it seems that wasn’t enough. This time it’s to be fourteen weeks, I gather.”
He sank back into his seat. The level of detail provided by Victorine lent an air of veracity to this preposterous tale. Could it really be…?” He raked his fingers through his hair.
“Very well. Tell me what has happened.”
“She was arrested with a bunch of others trying to set fire to the offices of Smalley and Haslewood.”
A firm of lawyers, he recognised the name. Their premises, as far as he could recall, were in Chelsea.
“Why would she do that?”
“Because she does whatever that dreadful Pankhurst woman says. Besotted, she is.”
“Are you telling me that Clarissa is a member of the Women’s Social and Political Union? The Suffragettes?”
“Yes, I am. And a more violent, immoral, and lawless crowd of females I have never heard of. They are outrageous, every last one of them, quite beyond the sensibilities of decent society. How a girl of her breeding became mixed up in such wickedness I can hardly imagine, but she has. And it’s your fault.”
“My fault? And how do you arrive at that, Victorine?”
“You should have got her married off three years ago when you had the chance. Mr Rigby was keen enough, and he would have soon brought her to heel. What Clarissa needs is a firm hand, a husband who can curtail her wild ways. Mr Rigby would have been perfect.”
“He’s a brute. His current wife has left him after less than two years of marriage to return to the sanctuary of her family and is petitioning the courts for a legal separation. Clarissa did not wish to marry him.”
“What does that have to do with it? You were her guardian at the time and could have permitted the match. A spot of discipline would have done her the world of good.”
“Perhaps, at some stage, you might see fit to join the rest of us in the twentieth century, Victorine. Gone are the days of forced marriage, of treating women as though they were a piece of property. Clarissa chose not to wed Rigby, and I don’t blame her. Of course I opposed the match.”
“And now look how things have turned out. Instead of remaining at home and behaving as a young lady of this family should, involved in charitable works, perhaps, or assisting in the running of the estate, she ups and goes to London. Takes rooms on her own, and the next we hear, she’s hurling petrol bombs and attacking policemen.”