I thought long and hard about what to say about Helen’s topic this week, “Other Talents”. My first notion was to introduce Salisha, my belly dancing alter-ego who existed long before Lisabet hit the scene. Then I realized that I’d already discussed my dancing in an earlier post. I could talk about the fact that I’m a genius computer programmer. I find software development incredibly exciting, but for most readers that would be about as sexy as income taxes. I can sing, draw, and cook. However, I don’t think I can compete with Helen or Donna George Storey. Then it hit me, my special talent that is simultaneously amusing and unusual.

I throw a mean party.

For me, organizing a party is a sublimely creative endeavor. Decorations, invitations, music, food and drink, games and activities, each aspect gives me a chance to express myself in a concrete way. I take entertainment extremely seriously.

Even as a shy teenager, the class nerd with the coke bottle glasses, I loved parties. In high school, a girlfriend and I threw a “computer matchmaking” party in her basement rec room. You must understand that this was a long time before any of us had ever seen a computer! We carefully selected an equal number of guys and girls and had each one fill out a questionnaire. Then we produced simulated punched cards encoding each person’s responses and used the traditional knitting needle approach to identify the couples whose responses were most similar, and hence were the most compatible. We didn’t spend much time on the decorations for that party, once we made sure that the couches were comfortable, since we planned to keep the lighting dim.

In college I lived in a dorm and didn’t have the opportunity to exercise my talent much, but in grad school I came into my own. I lived in a group house with five men. (There are lots of stories there, but I’ll save them for another post!) I’ll never forget the Hotel California Party we put together. It began at 9PM with pink champagne on ice and ran until dawn, when we served tequila sunrises. We weren’t able to install mirrors on the ceilings, but we didn’t need them.

At my first job out of graduate school, I was elected president of the company “entertainment committee”. I had a $20,000 annual budget to support events to amuse the thousand odd employees. Talk about heaven! I organized a Las Vegas night, a family barbecue with balloons and clowns and one-legged races, a boat trip to a local island. I got a bit spoiled!

Of course, all that entertainment had to be G-rated. Once I met my husband, our parties became spicier. I love costumes, the wilder the better. For years, our Halloween bashes were legendary. At one point, we were active in a group dedicated to open relationships, and threw an erotic costume party for our closest friends. I dressed as a mermaid, in a green satin “tail” I had created, bare-breasted except for loose fishnet and shell necklaces. My husband was a satyr, wearing horns and hairy pants that I’d fashioned from a brown plush bath rug. The other guests’ attire was equally provocative. 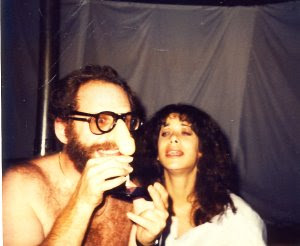 Our wedding was perhaps the most elaborate party we’ve ever organized. We gathered our seventy guests in a woodland clearing, at the edge of a small lake. We made banners emblazoned with personal symbols - a cat, a dragon, a yin/yang sign, the Hebrew characters for “life” - and hung them from the tree branches. I sewed the scarlet dress that I wore under my white sari. With some help from family and close friends, we prepared the food: Indonesian satay, lasagna, gazpacho, salads, homemade bread. For two months before the event, we had a Gantt chart up in my husband’s workshop, to help us coordinate our activities. 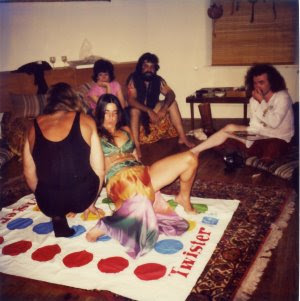 Not all of our parties were rated X. When we moved from our apartment into our first house, we held a “House Cooling Party” with a tropical theme. Before we left for our two-year stint working in Bangkok, our friends joined us at a “Jet Set” party. I built a replica of an airport security gate out of silver-backed foam insulation boards and set it outside the front door. We rented chrome-plated champagne coolers and serving dishes for a luxury effect. I wore a hot-pink gown with a plunging neckline, and pearls. 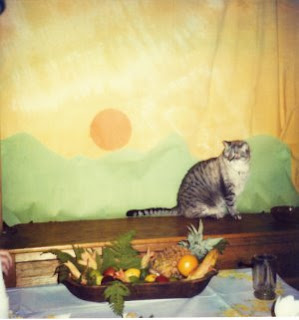 At some point, we must have had a science-fiction-themed party, because I vividly remember concocting a drink that I called “Blue Venusian Brew”. It was a vodka-based punch made with fresh blueberries, served in a transparent fish bowl. It must have been quite a party, because I don’t remember anything else!

As we’ve gotten older, our parties have become less frequent. Our friends became more conservative, especially as they began to have kids. People left town, or become too busy. I did organize an eightieth birthday bash for my father, which we managed to keep secret despite the fact that about fifty people attended. We held the party as his favorite sea-side restaurant, in a glass-walled room with gorgeous views of the ocean. It was a huge success. Guess I haven’t lost my touch.

Just a few weeks ago, we moved into a new apartment. I loved this place the first time I looked at it. It has an enormous living room and a big kitchen with tons of counter space. The first thing I thought of was, “This will be a great place to entertain.”

I’m planning a housewarming for next month!
Posted by Lisabet Sarai at 4:01 AM