I’m writing this with a baby asleep in the pram in my office. This sleeping fellow is baby Paxton. There’s no need to be quiet. You won’t wake him. 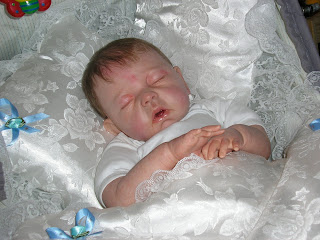 Paxton came into this world on Christmas day and is probably the three hundredth baby my wife has created. Yes. You read that correctly. 300. She’s a very productive lady. I’m very proud of her determined approach to creating babies.
Below is a picture of me holding Fester: the baby I made in September. 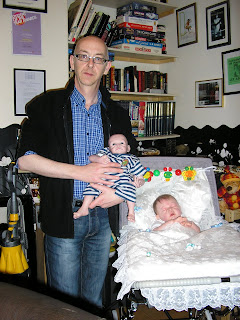 Before anyone starts to get confused, I should point out that the babies Tracy makes are actually dolls. Reborn dolls, to give them their correct titles: lifeless lumps of plastic fashioned, styled, weighted and painted to produce surprisingly realistic creations. Tracy paints them. Tracy adds hair to their scalp – rooting each strand individually. And Tracy also sells them. This is her website: http://wwww.artfulbabies.co.uk if you don’t believe me.

I’m not sure if the photographs above convey how realistic these dolls are. To illustrate how lifelike they are, we were recently driving to a doll show with a car stacked full of ‘babies’ in clear plastic boxes. We stopped at a motorway service station and took a break from the drive. A woman walked past the car and did a genuine double-take when she noticed our stock of two dozen ‘babies’ in plastic boxes.

The woman looked again and sighed with relief. I could understand her consternation. If the dolls had been real babies it would be troubling to think that someone was ferrying twenty-four youngsters across the country with all of them wobbling about in sealed, airtight boxes.

“I’m so glad you told me,” the woman said. “I was going to report you to the police.”

Which means I live in a house that’s invariably filled with kids, often upwards of a dozen, and all of them blissfully silent.

Does this interfere with my writing? Damned right it does.

When Tracy is ‘making a baby’ it’s not uncommon for arms, legs and heads to be strewn around the house like the remnants from a slasher-movie slaughter. I’ve been for a pee in the middle of the night and come face to face with a decapitated, eyeless head staring blindly at me from atop the cistern.

This is not conducive to writerly thoughts, unless you happen to be writing a book about murder, mutilation or decapitated eyeless heads staring at you in the midnight hour. Which, at the moment, I’m not.

In lots of ways it’s like having real kids in the house. Sometimes they’re a distraction: sometimes you forget that they’re there; and sometimes you can just put them into a plastic box whilst you get on with doing important stuff like writing – because that’s what caring parents do. (NB – please note I’m not seriously advocating stuffing children into plastic boxes. Cardboard boxes are more environmentally friendly).

Admittedly, on the kid front, I’m also fortunate enough to have Ash JR living at home. He’s 20 now (and will be 21 later this year) which means he’s no longer a child.

Does he know what I write? He always has done.

Do I protect him from my fiction? Most weekends we watch horror movies, trying to out-gross each other with selections picked for their über-scary special effects or chillingly-awful acting. Considering he’s so good at picking films I think I’m the one who needs protection of some sort.

Does he ever make writing problematic? Yes and no. His Playstation is addictive – especially those two-player games in which we can compete head-to-head. His tastes in movies and quality dramas are compelling. And he knows how to distract his father from a work in progress by simply arguing approaches to Shakespeare or discussing music. Single-handedly he’s far more of a distraction to my writing than the other 300 ‘babies who’ve been through the house in the past few years. But it’s never a problem to spend quality time with your son so that’s not really a problem. And, if it ever did become problematic, I could always try to put him in a box with one of the other ‘babies’ in the house. Because that’s what caring parents do.

Posted by Ashley Lister at 2:49 AM