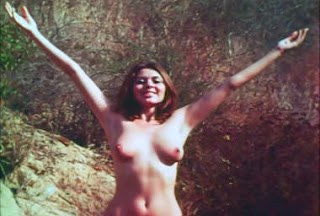 I still remember what I wore that night. It must have been summer, between my junior and senior years in high school. My sleeveless, dropped waist dress was light cotton, a rusty red with white polka dots. A line of buttons matching the dots ran from the neckline to the hem.
My boyfriend's parents were out of town. Looking back, I wonder that my mother didn't object to my being in his house, alone with him and his friendly Doberman, but perhaps she didn't know. I wasn't the rebellious type. I would not have deliberately lied. Maybe I didn't realize P. and I would end up there in his bedroom, after going out for a bite to eat in his VW Beetle. I can't recall.
We were sprawled on his bed making out (do kids today still use that term?), hot, wet, desperate kisses with lots of tongue. His hands wandered over my back and then, tentatively, cupped my breasts through my dress. "Take it off," he murmured, amazed, I'm sure, at his own daring.
"I can't..." I began. I knew that society required me to keep my clothes on when I was with a boy. I was well aware that girls who gave in to boys' requests would inevitably acquire a "bad reputation". Back then, even letting a guy get to second base (http://en.wikipedia.org/wiki/Baseball_metaphors_for_sex ) would certainly result in whispered gossip and possibly in public taunts. Strictly speaking I wasn't a virgin, but my single sexual interlude hadn't taught me much. I was as awkward and confused as any sixteen year old.
P. kissed me harder, but he didn't press the issue. I was the one who wanted more. I wanted to remove my dress, to feel his hands on my skin. Resentment filled me. It seemed so unfair that society should forbid what felt so wonderful.
Then it hit me, quite literally like a bolt of lightning. I gasped. P. broke our embrace, afraid he'd somehow hurt me.
I didn't have to say no, just because other people insisted I should. I was free to say yes. I was dying to be closer to the guy I loved. Was that wrong? I understood that I'd have to accept any consequences, but seriously, was there a good reason why I shouldn't do as he asked?
"Wait," I told him. I stood up and started to unfasten my dress, one button at a time.

I wasn't deliberately trying to be seductive, but I felt the heat of P.'s stare as, button by button, I exposed my plain white bra and panties. I felt light-headed, jubilant, powerful. And free.
I don't think I knew the word "lust" back then. Certainly I didn't have enough experience to recognize it when I felt it. I saw my own excitement mirrored in P.'s face, along with a touching gratitude. He seemed quite astonished that I was trusting him.
I lay back down on his bed, clad in my underwear, more fevered and needy than ever. We didn't push things much further that night. It was almost as though the step I'd taken was enough for us, for a while at least.
Looking back now, I see that high school epiphany as a first step toward defining my own personal philosophy of sex. Why should I refuse pleasure just because someone else thinks it's not proper? Since that evening, I've said yes to many sexual adventures, and enjoyed almost all of them.
Of course, that was a golden time, after the invention of the Pill and before the discovery of AIDS. Sexual freedom had few if any restrictions. The Morality Police didn't yet have much influence. The boundaries between love and lust were deliciously fluid.
I learned something fundamental, back there in high school, not just about sex but about life in general. You can't allow others to make your decisions for you. Don't listen when someone tells you that you're not allowed to pursue your dream. Weigh the consequences and risks for yourself, but then don't be afraid to say yes, if that's what your heart tells you.
We all have more freedom than we realize. We just need to claim it, to make it our own.