Magic in the Real World by Giselle Renarde 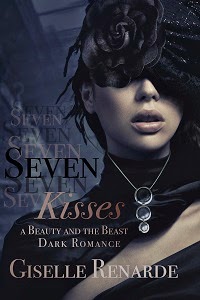 I'd conceptualized Seven Kisses as REAL realism, but before long I knew the book NEEDED a touch of magic. That magical element was required to offset the horror and the fear.

Gabrielle*, my protagonist, spends a good part of the novel drugged and strapped to a hospital bed against her will. After everything she goes through, she deserves an experience far more magical than mere escape--something more magical even than love.

Last week I watched a free preview channel called Crime and Investigation. Mainly, it was three billion episodes of Law and Order, which was fine by me. I went with it. But then a different show came on: My Haunted House. And it scared the bejeezus out of me.

Okay, it was two in the morning and I was alone in the apartment, so maybe I was predisposed via setting to being wildly afraid of something that was only mildly scary. But maybe not.  The stories were terribly terrifying.

I can get on board with vampires if I really want to (blood has a certain appeal), but I find werewolves puzzling.  If you want to write about them, it seems like you have to be really attuned to the trend. I've written one werewolf ebook. It's a twentieth century historical called The Beast In Me (named after this song). I really quite like my werewolf historical, but I don't think it ever saw a review over 3 stars. So that was the first and last werewolf book for me.

So why don't I write more of it? In the meantime, a lot of people have asked where they can buy Seven Kisses (and get their magic on!), so here are links to for Amazon, Amazon UK, Barnes and Noble, and iTunes. It's available a bunch of other places too, as an ebook and in print.


*Within the first few paragraphs, I was having so much trouble typing "Gabrielle" that I had to transcribe the name as "ghgh" and then do a general search-and-replace. The name tripped up my fingers. Not just that, but it's too close to mine. Either I'd type "Giselle" or I'd type Gabrighsle (yeah, it trips up my fingers THAT much!). Then when I started watching Archer, the name started coming out as "Lana" and that's when I knew I'd fallen deep into fanfic mode, but like I said: a story for another day.
Posted by Giselle Renarde at 1:20 AM