The Hite of Curiosity 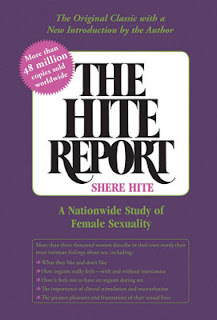 The summer half my family fled Hawaii, my mother regained the trove of possessions she’d left behind in Denver. Among the family heirlooms and old furniture was a collection of her old books, and that was what drew most of my attention.

I was at the age where I was desperately trying to put together the facts behind the allusions people made to sex. I could say the number 69 with a knowing inflection, but I had no idea what act it signified.

That summer, I came across several books that opened my eyes.

We’d moved into a squalid apartment in a neighborhood of Atlanta marked primarily by white flight and the large empty buildings left in its wake. The previous occupants had left behind a lot of things, including a stack of paperback novels in one of the closets.

I pounced on the novels and quickly made the discovery that many of them contained “good parts.” I was supposed to be unpacking boxes and moving into my new room, but I spent hours with the lower half of my body hidden in the closet, reading and internally pulsing. I hadn’t really worked out how to masturbate to orgasm with reliability. I knew the word orgasm but wasn’t entirely sure what it represented. I’d experienced something that maybe qualified, but I wasn’t 100% confident about what I’d felt. I’d read enough to figure out that sex involved penetration, but simulating that with my fingers enough to come required acrobatic contortions and lots of uninterrupted time. (I didn’t yet have any concept of sex outside heteronormative images of the penis entering the vagina.)

In a fit of shame, though, I threw away all the books. I still regret doing that.

My mother’s old collection, however, came to my rescue.

Among it was The Hite Report: A Nationwide Study of Female Sexuality (the 1976 edition—which is where I’m pinning my connection to the topic). It had a stark, unassuming cover, and I’m sure it was only the word “sexuality” that drew my attention.

I hadn’t been explicitly forbidden from reading it, but I wouldn’t touch it during the day. Instead, I waited for night to fall and snuck down to find it in its place on the shelf. Huddled there, breathing the dust lingering from the storage unit, turning pages cracked and yellowed with age, I discovered the answers to many of my questions.

I read the book haphazardly, in breathless snatches, aroused by its clinical language perhaps even more than by the “good parts” of the novels I’d found earlier. But I would never have dreamed of throwing this book away. It was so obviously valuable, not only for its practical advice but also for the glimpse it gave me into the feelings women had about sex.

A phrase that, for some reason, sticks in my head to this day is, “I washed, and so should he.” I believe this was a woman lamenting that her partner wouldn’t go down on her, not even when she performed oral sex on him. In retrospect, remembered snippets like this have cropped up many times in my mind over the years.

It wasn’t only that I got a view into the forbidden details I was looking for. I was also introduced to simmering resentments, difficulties of communication, inequities between the sexes, and the idea that sex did not necessarily work like magic (as those novels had pretended it would).

Very little that I’ve read in my life remains as present in my head as The Hite Report. It gave me an education when I needed it, but it also reassured me that adults did not have this sex thing figured out either.