When We Were Jung


I'm not sure why I have this book. 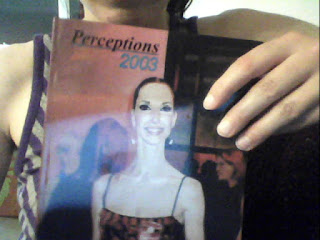 I found it at the back of my bookshelf last week. It's some kind of journal, I guess, published by the University of Toronto's Undergraduate English Student's Union. I was a student at U of T, but not an English student. Nothing I wrote back then was ever published.

I was about to get rid of it when I had two thoughts: 1) I wonder if that's a painting of Lisa Kudrow; and 2) Hey, I don't think I ever even opened this thing.

So I opened it. I flipped through it. And one paper caught my eye: 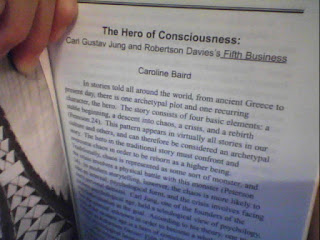 Let me take you back in time. Back to high school. Back to Grade 12 English class and Fifth Business. 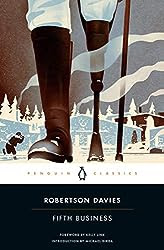 In case you haven't heard of it, Fifth Business is a novel by Robertson Davies. For a book that had me awestruck at seventeen, I actually don't remember much about it. Mind you, flipping through the Jungian interpretation in this student journal, I do remember how I felt the first time I read it--not just read it, but analyzed it. From a Jungian perspective, of course.

I was in Grade Seven the first time I read Jung. At the time, I was interested in parapsychology. I knew Jung was a respected psychologist, so I thought he might have something to say on the matter of psychics and ghosts and all that. He didn't, not really, but I didn't find that out until I'd walked to the public library and checked out the biggest book of Jung they had. 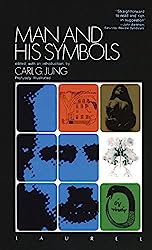 What I got from Jung was a kind of spiritual fulfillment I never found with religion. At thirteen, my parents allowed me to choose whether I wanted to continue (casually) attending church services or not. My mom and dad weren't religious, and my grandparents were atheists and agnostics, so they didn't really care, but I wanted to make the right choice.

When I was twelve, I researched world religions--in preparation. Thirteen would be a big year for my soul. Lots of responsibility. Better get this right.

Eastern religions appealed to me, but I ultimately decided that organized religion wasn't my bag. I think it was those eastern influences that drew me to Jung's writings. I would give you specifics if I could remember any, but my academic years are a haze now. Sometimes I think I've forgotten 90% of everything I've ever learned.

Anyway, by the time we studied Fifth Business in Grade Twelve, I'd read a lot of Jung. It isn't by chance that the book opens itself so neatly to Jungian interpretation. Jung is built right into to text.

Still, I was entranced by my teacher's lessons. He'd written his Masters thesis on Jungian influences in Fifth Business, so it was close to his academic heart.

I felt proud that someone so intelligent could be infinitely interested in what I had to say. I had a hungry, hungry ego, and he fed it with attention.

When I wrote Audrey and Lawrence (a collection of short stories about a married man and his much younger mistress) I called his character Lawrence Galloway. For consistency's sake, I reused that name when I published Like It's 1999: Diary of a Teenager in Love with a Teacher (which, as you know, is my actual real life journal from my last year of high school).

Funny that it's taken me this many years to piece together the Jung connection. I really didn't see it before now, but we had a bit of a menage situation, Lawrence, Jung, Robertson Davies and 17-year-old me.

Jung brought us together, but if we'd been interested in analyzing ourselves as much as we were interested in analyzing Canadian literary fiction, we wouldn't have stayed together long. Our complexes were invisible to our eyes, and they kept us going for a good ten years after Jung had jumped ship.
Posted by Giselle Renarde at 2:46 AM