This fortnight's topic is personal demons. Since I'm practically perfect in every way (HA!) I guess I'll just have to post an excerpt from my demonic possession novella Monstrous Obsession.


Artemis has never relied on a man for anything. When she moves in with her biker boyfriend, she worries she’s losing her independence. The moment she sets foot inside Budd’s big house, she realizes something demonic lives there. Artemis needs help. Can she learn to accept it from the man who loves her... before it's too late?


Until Budd turned out the lights, the atmosphere in the bedroom felt safe and protected.  Once darkness had fallen, all bets were off.  He slept on his side, facing away from her, and she wished he’d roll over, take her in his arms.
Artemis had never, in her entire life, felt so alone.
On top of the aching loneliness, she knew it was watching.  She didn’t know what it was, but she sensed its presence in the room, like a haze. Not a visible mist or fog, but dense, hot energy.  The force made it hard to breathe.  And moving?  That was out of the question.  Its haunting presence held her down.
In her mind, she asked, “Who are you?  What do you want?”
She heard him laughing.  He was inside her head, hearing her thoughts and feeling her fear.  Never in her life had she felt so invaded.
“Get out of me,” she said, panicking, struggling to move. “Get out!”
The laughter grew more resonant, until it vibrated in her belly.  It wasn’t just an impression on her mind anymore.  He’d found a way inside her body.
“Get out!”
This time, instead of laughing, the creature spoke from deep inside her. “Darling, I’m just getting started.”
Just getting started?  What was that supposed to mean?
Before the monstrous entity could offer any clue, it rose from her body like morning mist burning off an open field.
And then the room went quiet.
Not an eerie quiet.  Not a scary quiet.  Just a silent night beside her boyfriend quiet.  No suggestion of anything malevolent.  The air cleared so thoroughly she wondered if she’d imagined it all.  Really, she had no reasonable proof the creature existed.  Maybe she was scared of life with Budd and Vincent, and fear created monsters in her mind.
Artemis sat up, feeling more than a little proud of herself.  She’d defeated a psychological demon.  Good for her!
Hopping out of bed, she tossed Budd’s T-shirt over her head and went to the bathroom for a midnight pee.  Mmm… his top smelled like him, and she savoured the scent as she grabbed a wad of toilet paper.  When she wiped… well, that was weird.  Why was she so wet down there?  And not pee-wet.  Arousal wet.  It just kept coming.
Artemis gave up and walked back to the bedroom, feeling slick between the thighs.  Very weird.  Not that she had trouble getting turned on, just that her arousal was usually inspired by… well, something.
When she arrived at the bedroom door, Budd sat up against the headboard.
“Sorry,” Artemis said.  “Did I wake you?” 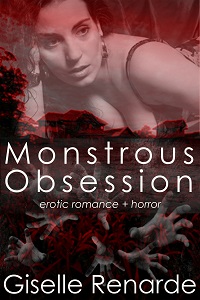