When I started writing actual books I was ostensibly a mystery writer - a sort of gay Agatha Christie. There was a bit of sex in there, more or less glossed over in an effort to get on with the story - as one critic stated sourly.

Recently a review site (name on request) said I was the Ann Rice of m/m vampire fiction. I kinda liked that, as I was a huge fan of Ms. Rice ever since Interview With A Vampire. I just wish this accolade was reflected in my sales! But it made me think, Ann Rice really didn't write erotica - wait a minute, that's not true. She did write a series, Sleeping Beauty under the pseudonym A. N. Roquelaure, but they were a far cry from the sexual relationships in her vampire series.

I'm not sure if I write erotica or not. Yes, there is sex in my books nowadays, a lot of it, but I wonder what the difference is between erotica and graphic sex. To me eroticism is more of a mood, a sultry ambience, a hint of lust, a trailing of fingers over fevered skin, a brushing of lips, a breathy whispered plea. I'm pretty sure I don't write that into my sex scenes. They tend to be more... well... graphic.

Warning: m/m explicit sexual intercourse for those faint of heart.


Jason pulled back slightly, eliciting a groan of protest from Joel. He dropped to his knees and flung his arms around Joel, showering his face and lips with kisses.

“You are so incredible,” he whispered. “Let me do the same for you.” He  fumbled with the fly buttons of Joel’s jeans, almost pulling them off in his haste to get at Joel’s cock. Joel lay on his back and raised his hips helping Jason to pull his jeans down. Jason’s eyes widened at the sight of the massive bulge straining at the fabric of the jockstrap Joel was wearing.

“Wow,” he murmured on a breath. Like a kid in a candy shop, his eyes gleamed with anticipation as he peeled the jock away. Joel’s cock was more than just impressive. Almost ten inches of hard throbbing flesh met Jason’s admiring gaze. Gripping it at the base, he wondered if  he could get all of it his mouth. He shivered as he imagined it all the way inside him, reaming his ass, fucking him like he’d never been fucked before. Why hadn’t he thought of bringing a condom and lube to the office? Well, because he’d thought they really were going on a lunch date. But this was so much better...

He leaned down to take the head of Joel’s cock into his mouth. Oh, so sweet, the creamy precum that pooled on his tongue, the musky masculine scent that drifted into his nostrils, the feel of hot steel under silken skin in his hand.

The low groan of pleasure that rumbled from Joel’s chest urged Jason on, his lips sliding up and down Joel’s erection, his throat opening wide to take the prodigious length and thickness all the way in. Joel’s hips bucked, another groan escaped him, his hands caressing the sides of Jason’s face.

Jason’s tongue swirled around the underside of Joel’s cock, sliding again and again over the thick vein that ran from the base to just under the head. Every smooth and sensual slide brought Joel closer and closer to the edge. Jason could hear the hitch in his breathing, the heavy rasping sound that told him Joel was ready. He gripped the base of Joel’s cock  and sucked harder, longer, until he was rewarded by the first spurt of cum hitting his palette. He gulped at it, swallowing it down as another followed, then yet another. Joel’s body spasmed under him, the hands that had caressed him now clutched at his hair as the bigger man lost himself in the ecstasy of his orgasm.

Jason slowly released Joel, pausing to lick at the last vestiges of semen from the slit.


“Professor Fielding, correct?” Smiling, Professor Macpherson walked swiftly over to stand in the crook of the piano, one hand touching the polished mahogany, a gentle smile lifting the corners of his mouth.

“Correct. But please call me Christopher.”

“I prefer it to Fielding, as your friend calls you.”

“Percy calls everyone by their surname. His is a bit of a mouthful.”

“Sommers-Smythe. Yes it is. You must call me William, or Mac, if you prefer.”

“I prefer William. It’s a nice name. Strong, evocative of a man who—” Christopher stopped, uncomfortably aware that William’s eyes were twinkling with amusement. “I’m sorry, I babble too much at times.”

“Not babble... I would very much like to hear what I evoke within you.”

Dear God, does this man know what his eyes, his mouth, his smile do to me? I couldn’t stand up now for all of the tea in China...

William leaned forward resting both his arms on top of the piano and gazed into Christopher’s eyes.  “Professor Fielding, you are blushing.”

“The piece you were playing when I came in...” William interrupted Christopher’s mumbling. “Would you play it again, for me?”

“What? Why, yes, of course.” Glad of something to do that would stop him from making an even bigger fool of himself, he placed his trembling hands on the keys and began to play. “It’s not quite finished. Some of the chords towards the end are still eluding me.”

William said nothing, but closed his eyes as Christopher played the piece he was composing for the end of term concert. Under his fingers, the notes rippled, the melody clear and rich, the harmonies deep and resonant. Towards the end of the piece, near the part that had been bothering him, Christopher lifted his gaze in apology and found William staring at him intently, his green eyes glistening pools of emotion. Christopher’s breath caught in his chest, his hands swept over the keys finding those elusive chords, bringing the piece to a close on a diminuendo so subtle that those last notes seemed to hang in the air for several seconds after he had lifted his hands from the keys.

The silence that followed made Christopher’s stomach roil. He hated it...

“I-I’m sorry,” he whispered, looking away from William’s impassive expression. “I said it was unfinished, that it was—”

“The piece you have just played. I have never heard anything more beautiful.”

“Hush.” William moved slowly nearer to Christopher, then dropped down onto the bench, sitting so close that their thighs were pressed together. He took Christopher’s hand in his and raised it to his lips.  “Almost as beautiful as the composer. Almost.”

Somewhere in the building, a bell sounded, marking the end of a class, breaking the spell that had been cast over both men. William stood quickly, but remained looking down on Christopher’s upturned face.

"My apologies if I have overstepped the mark.” His voice was deep, the gentle burr lending it a subtle allure that Christopher found irresistible. “Your music sparked something inside me I found hard to ignore.” His smile, though solemn, was nonetheless beguiling. “See what you have evoked within me?”

Christopher's eyes widened as he stared at the tell tale bulge behind William's fly. 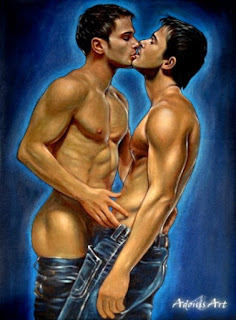