Over the Taboo Rainbow

When daddy smut started taking over the erotica bestsellers lists, it literally turned my stomach. Every time I saw a book cover that said FUCK ME, DADDY! I felt physically ill.

When was that?  Maybe 2013? Or was 2013 the year Amazon et al started banning it because of its sudden hyper-visibility?

I don't know. But I think 2013 was the year I wrote my Adam and Sheree trilogy: 100,000 words about a brother and sister fucking each other and a bunch of other people. Sheree really gets around. In the the third book she sleeps with her aunt, her uncle and her cousin. There's a whole lot of family sex going on.

Why was I grossed out by the daddy/daughter thing but not by the brother/sister (uncle/aunt/cousin) thing? 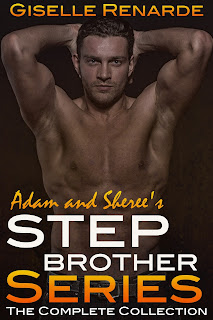 I remember the day Adam and Sheree came to me.  I'd just taken a shower and I recall being very hot... too hot. My body just started shutting down.  I'm not a "nap" person, but it was daytime and I felt oddly exhausted. I folded myself into a ball on my bed and Adam and Sheree's Family Vacation (now also available from Amazon as Stepbrother Summer) played out for me like a movie.

It was the strangest thing. It's never happened to me before or since.  I don't think I was asleep and I didn't feel like I was dreaming. It was a movie in my mind.

As soon as it was over, I went to my computer and started typing. The words poured out of me. My fingers did all the work. My brain didn't play a part in writing any of these books.

I don't know where Adam and Sheree came from.

But it took a while before I could cross from their taboo into Lexi Wood's brand of stepdaddy/stepdaughter smut.

Is that as "bad" as brother/sister sex? Or is it worse because there's a power imbalance between a father and daughter (whether biological or not) that doesn't exist between siblings?

Or is it HOTTER because of that power imbalance?

These are major taboos. These are ideas that turned my stomach a few years ago.

How does a writer go from turned stomach to turned on?

Is it all about the cash?

Taboo smut is harder to publish these days than it was a few years ago.  Apple won't touch it. All Romance won't. Google Play won't.  Forget Kobo, too.  Amazon will allow you to publish stepdaddy smut as long as you don't include the word "stepdaddy" in the title or the blurb or on the cover or... anywhere, really.

Straight-up incest erotica can only be published at Smashwords, Barnes and Noble, and Excitica. How can it possibly be that lucrative if you can barely get it to market?

So, when my sock puppet nemesis Lexi Wood challenged me to an incest erotica duel a few weeks ago, why did I accept?  I'm the least competitive person in the world, so it's not like I cared about defending a title or anything.

I accepted because I wanted to do it.

Last year someone staged an opera about Anais Nin's affair with her father. It sounded titillating, but I didn't see it. Wish I had. Still, it planted ideas in my head. It planted the idea of a father and daughter meeting as adults and falling hard for each other.  I felt I could do something with that.

Round One of the Lexi vs. Giselle Smut Smackdown has begun. My very refined (HA!) meeting-as-adult story against Lexi's dirty-talking phone sex smut. We're encouraging readers to vote for their favourite. 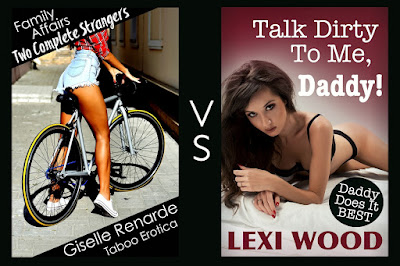 Here's the warning I'll issue about writing dirty daddy sex: once you've crossed that line it's damn hard to cross back. You start seeing the world in this new taboo rainbow, and the things you used to write seem so grey and dull.

I heard John Waters talking about The Wizard of Oz one time. He said he always wondered why Dorothy wanted to go back to the black-and-white world after experiencing life over the rainbow.

Why would anyone go back?


You can find out more about the Smut Smackdown at my blog: http://donutsdesires.blogspot.ca/2016/02/smut-smackdown-talk-dirty-to-me-daddy.html

And if you haven't read Adam and Sheree, the entire Stepbrother version is available for preorder at http://www.amazon.com/gp/product/B01C8XFNBW?tag=dondes-20 for only $2.99 USD. That's incredible value for all three books, and trust me--that price won't last. Comes out March 11th!

Posted by Giselle Renarde at 12:27 AM