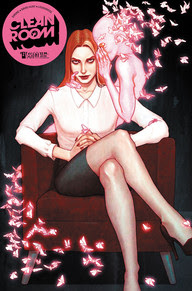 So, so amazing. So not for the faint of heart. I think this graphic novel touches on all my personal nightmares: the temptation to suicide, sexual shame, the power of cult control, confusion about what it means to do the right thing, actual demons. After the main character's fiance commits suicide, she sets about investigating the book he was reading at the time he died, which was written by the charismatic "motivational speaker" Astrid Mueller. Astrid is one of the most fascinating characters I've ever seen. On the one hand, she's cold and terrifying. She orders her followers around with apparent disregard for them, and sacrifices lives with no hesitation. On the other, she seems to be fighting some sort of demonic invasion, and every time I lower my guard, I get drawn into appreciating her and wanting her to succeed. I've been told characters are charismatic, but rarely have I experienced a character's charisma as directly as I do Astrid's.

The book is mysterious, so it's hard to say exactly what's going on and exactly how Astrid's methods are supposed to work. She encourages an odd sort of sexual frankness in her followers (perhaps to stave off the demons' ability to exploit sexual shame?), which makes for some really interesting scenes. The main character is balanced between so many things that it's hard to say if she's mad or brave. The art is the stuff that gets inside your dreams. I've spent hours staring at it. I'll definitely keep following this series.

An Accident of Stars
By Foz Meadows 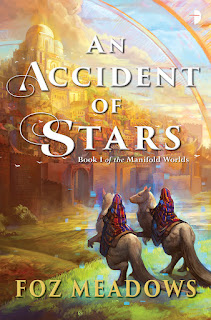 This is the fantasy book I've been waiting for my whole life. On the surface it has a familiar structure: teenage girl falls through a portal and winds up in a magical land where she becomes embroiled in power politics, experiences magic, learns to fight, and falls in love. There's so much more here, though. All the cultures of the other world are fascinating and well drawn (sign me up for the matriarchal sun-worshiping dragon-following warrior women, please!). There's a brutality to the narrative that makes the choices feel very real—but it's not just that the brutality is shown in a gory way, it's that the author is very astute about showing the psychological consequences of that brutality. And... drum roll, please... the social norm in the other world is bisexual polyamorous relationships which is A) gratifying to see treated as normal, B) makes for very interesting politics, and C) allows for some really cool scenes. This is diversity working in the service of a really fascinating setting. There's a lot of awareness in this book that issues aren't black and white, that people are complicated, that it's not so easy to wear labels. And there are cool scenes of swallowing hallucinogenic dragon scales.

I spent the week I was reading this book waving it at anyone who would tolerate me. (Maybe this is how I should deal with harassment: Guy on Street: "Hey, beautiful." Me: "OMG, I'm so glad you want to talk about this awesome book about matriarchal warrior women who commune with dragons. I wrote my phone number on one of the pages of this book, I swear. You'll just have to read the book to find it. See you!") 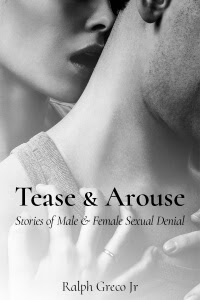 So. Hot. This is cleverly packaged: it's one e-book about female orgasm denial, and one about male orgasm denial. If you buy the paperback, you get both, plus an extra story. This book made me question a lot of my assumptions about my sexuality. I knew I was into female orgasm denial, and I thought I'd read the half about male orgasm denial for curiosity. However, the male orgasm denial stories were so hot I think I burned my fingers on the pages. I don't think of myself as someone who wants to dominate men. I thought a lot about what was going on with those scenes. Did I want to be the top? Did I want to submit in a way more similar to the way the men submitted than the way the women did? Do I want to have a cock? Is it that I prefer the image of female top? Is it just that I'd enjoy watching a scene like this? Is it that Ralph Greco Jr. happens to write this sort of scene particularly well? I don't know the answers to any of those questions, but the motor on my vibrator may break while I try to figure it out.

Interestingly, the theme of the paragraph I just wrote is very similar to that of the story I have forthcoming in Best Women's Erotica of the Year, Volume 2, "On Some Maps, But Not on Others." In that story, my main character gets similarly fascinating with CBT, and has many of the same questions. So maybe this is just a theme for me lately.

Anyway, I enjoyed the book. Though this is another tragic example of a book that needed more editing. Ralph, please email me. I will fix your typos and make sure your character names stay consistent. Just write me more stories about cock cages, and don't force me to be distracted by missing words and garbled sentences. Or maybe this is the most clever sort of denial of all?

Shrill: Notes from a Loud Woman
by Lindy West 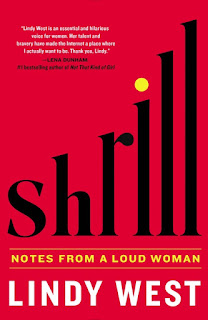 This feminist memoir displays incredible range. At moments, it's uplifting, and it makes me feel like everything is worth it and possible. At other moments, it describes the depths of how ground down sexism can feel, and the sympathetic memories that rise up for me threaten to pull me under. The author is hilarious when she wants to be. She has a wry turn of phrase that makes me jealous as a writer. And she can also write poetry that breaks your heart. She speaks with righteous anger about the ways she's been tormented for being a woman, for having a body. At the same time, she writes with tremendous tenderness about her husband, how she fell in love with him, how they both became brave enough to stay together. I was particularly fascinated by a chapter about her experiences working with Dan Savage. She clearly has tremendous respect for him as a writer, editor, and boss, and she also discusses an unlovely chapter in his history, how she challenged him on it, and how they both emerged from the experience.

This book is very worthwhile, and also quite difficult and heartbreaking at times. It perhaps hit me harder that way because I lost a very important friendship in part over the rape jokes in comedy issue that makes up a large part of the book's narrative (I know that, if you haven't followed that issue, it might seem trivial, but there was something really wrenching about experiencing it as a devoted fan of comedy on the one hand and as a feminist on the other, which is something that West's narrative makes abundantly clear).

An interesting thing I just noticed, which is perhaps a bright spot for those of us who wonder about social media marketing: I discovered every one of these books through Twitter.

On a personal note, due to an emergency in my partner's family, I'll be flying to Ukraine tonight. I likely will not get to comments on this until a couple weeks from now.
Posted by Annabeth Leong at 12:00 PM