I’ve done a fair bit of travelling in my mid-twenties. I was never (and am still not) the type that travels for shopping or partying. You’ll never see me at a beach and if you see me in a mall, I’m probably just passing through or grabbing a quick bite to eat.

I love to see sites of historical and cultural significance. I love to see the out-of-the-way places, visiting towns and cities where the tourism industry hasn’t really hit yet.

While I do plan an itinerary when I travel, the most meaningful experiences are often the unplanned ones. When I was in Edinburgh, I made a new friend in the hostel who lived in Ludlow, England, and I ended up visiting him for a week after my time in Scotland was over. I got to see small-town England and Wales and got a lot more out of my time there than if I would have just stuck with my itinerary.

But it’s my time in Bosnia and Herzegovina that will forever remain with me as the most meaningful non-planned experience. I went on a month-long trip to the Balkans in late 2008 with my old Brazilian pen pal. Our plan was to visit Slovenia, Croatia, and Bosnia and Herzegovina — but we ended up also taking a day trip to Italy and another to Montenegro. 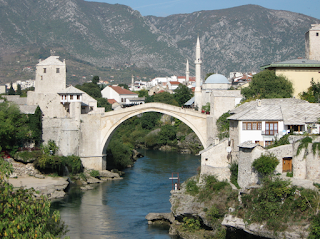 In Bosnia we planned a few days in Mostar (famous for the high bridge it has over the river, which is also famous for the annual event in which divers dive off the bridge and into the water) and a few days in Sarajevo. My pen pal was working on his masters in a journalism program and he had arranged for some interviews in Sarajevo, so he could write about children growing up in the shadow of the Bosnian war. I tagged along and we met with staff at an orphanage, met regularly with a local journalist, and we met with children who attend an after-school program run by an aid organization.

The scars of war are everywhere in Bosnia.

The first thing I noticed in Mostar were the graveyards. Fields of hundreds of identical white headstones are spread throughout the city, with almost all death dates being in the same year. The buildings are still pockmarked by bullets. Other buildings still lie in ruins, waiting to be completely demolished and rebuilt. By the time we were in Bosnia, the war had been over for thirteen years.

On our first day in Mostar, we went to the bank to exchange money for the local currency. On our way out of the bank, a security guard who was blind in one eye and missing a leg, held the door open for us. Immediately across the street is a sea of white tombstones.

We proceeded around the corner to pass through the Old Town and head back to our hostel. The street was made of cobblestones and people around us were chatting happily as they proceeded about their shopping. As we neared a corner, I heard a man singing — full of soul and pain, his voice haunting. Rounding the corner, I found the singer. An older man, also missing a leg, sat at a table in an empty open-air bar, singing into his beer. I don’t know the words but it doesn’t matter, it’s clear he was still mourning losses suffered in the war. 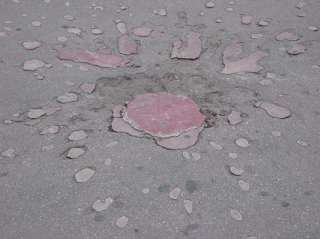 After a few days of seeing Mostar — with its unusual feel of being both an attractive place to visit and a city still struggling to get back on its feet — we headed to Sarajevo. The capital of Bosnia, Sarajevo is much the same as Mostar. Though they’ve been working at rebuilding for thirteen years, the scars of war are everywhere. From pockmarked buildings, to Sarajevo Roses (red resin poured into the craters left in the sidewalk by an explosion), to half-blind, legless, and destitute people, to the ever-present fear that there are still landmines in the outskirts of town.

On our first day, we proceeded to one of the highest points of the city — it’s something I like to do when I travel, as it lets me see a city and take photos. The first thing I noticed when we reached a high point was the graveyards. Like Mostar, there are numerous fields of identical white headstones, all with the same death year. Sarajevo sits in a valley and from a high point, you can see the seas of white tombstones. You can never not see the war. 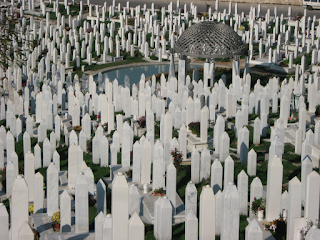 Toward the end of our time in Bosnia, we planned a day trip to see Srebrenica, to visit the memorial for the Srebrenica Genocide.

Getting there was a challenge. Our taxi driver didn’t know English, but we managed to remember the Bosnian word for “bus” and so the taxi driver got us to the bus station. We bought our tickets and got on and trundled on down the highway. Eventually, midway between Sarajevo and Srebrenica, the bus rolled to a stop. The bus driver shouted something and everyone got off the bus, got on their cell phones, and were promptly picked up and taken away by friends and family.

We got off the bus and wandered into the little convenience store the bus had stopped next to. We found someone who spoke English — a young man about our age who learned English from movies and TV — and we learned that the bus had broken down. When we mentioned we were headed to Srebrenica, he offered to drive us the rest of the way, as it was only another fifteen minutes or so.

We took him up on his offer. As we drove, he asked us about where we’re from and what brings us to Bosnia. And when we got to the genocide memorial, he offered to walk us through it.

The morning was cool and a light fog had rolled in. The three of us got out of the car and wandered into the memorial. There is a huge circular marker that has all of the names of the victims etched on it, there’s a graveyard with another sea of white tombstones, and a memorial building with haunting images of the aftermath of the genocide.

As we walked along the path, I noticed there were a few other people in the graveyard — women and men laying flowers next to the graves of loved ones, whispering words of love and loss.

We rounded the bend in the path and our driver pointed at a row of headstones. He said, “There’s a man and his sons buried there. That’s my uncle and my cousins.” 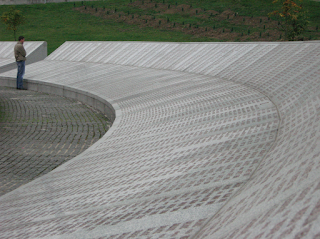 He walked over to the headstones and we gave him his privacy, so he could have a few moments with his family. We kept walking on, completing the path through the graveyard and returning to the memorial with the etched names. We wandered around, taking pictures as tourists do — but doing our best to be discreet and respectful — and I watched as our driver came to the memorial and headed directly for a specific spot. He reached out and touched a set of names.

Shortly after that, we emerged from the memorial and graveyard. The man wished us all the best in our continued vacation and promptly headed home. We wandered through the town and eventually found the bus station to take us back to Sarajevo.

I can still remember that day vividly. It’s one thing to be in a place haunted by war and genocide, but it’s a different thing entirely to have that personal connection we stumbled upon that day. Without that personal connection, everything can be held at a comfortable distance. Even though we were in the very spot where a genocide happened thirteen years ago, it would have been easy to treat it like a history book — these are the facts of what happened in that terrible event and here is the memorial for it. But to have that personal connection — a personal tour — made me confront that this is not simply a historical event, but this is a terrible wound that has still not healed.

It’s moments like this that are not only the most meaningful on a vacation, but they can also be the most impactful on a person. I am and always have been a very peaceful person, very understanding and accepting, but I can’t help but wonder if this visit to Srebrenica — where I not only visited the graves of people who were massacred, but was personally brought there by someone who likely barely escaped with his own life — affected me in such a way that reinforced and strengthened my approach to life.

It was shortly after this vacation, after all, that I applied for and participated in a peace and conflict study trip to Israel and the Palestinian Territories, and shortly after that I enrolled in my masters program, studying equity and community development. I learned all about hate and love, about destruction and peace-building, and about death and life.

And all of this happened because my pen pal emailed me and said, “Want to go on a vacation?”


All images are copyrighted by Cameron D. James.