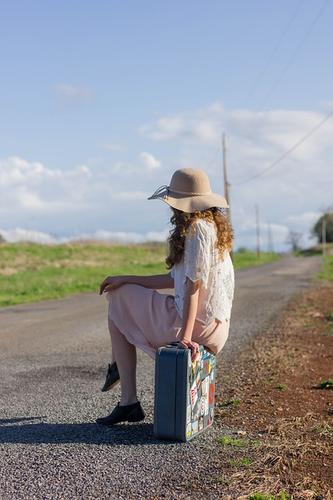 One of my life goals is to succeed in packing two week’s worth of stuff in a carry-on bag.

Don’t laugh. I’ve done a lot of traveling, visiting every continent except Australia. On almost every trip, I’ve been weighed down by excess luggage. I recall my first journey to Bali, in the mid-1980s. I’d bought a new soft-sided bag, what seemed like a clever innovation with four small wheels on the bottom and zippers that allowed you to add capacity, in several stages. I wasn’t able to find a picture even on the Internet—that’s how long ago it was!—but imagine something like a vertically expandable rolling backpack. Plenty of space, I figured, plus with the wheels I wouldn’t have to carry it. I stuffed it to the gills. Then I spent hot, miserable hours dragging it behind me along the dirt roads in Legian, looking for a guest house.

In 2000, my husband and I took a dream vacation to Provence. Ten days. Four suitcases, two large and two small. We’d booked an intimate, atmospheric hotel on the harbor in Marseille, quintessentially French. I adored the place—except for the fact that it had no elevator, just lovely spiral staircases. Our room on the fourth floor had a wonderful view. What I recall most vividly, though, is wrestling those heavy bags up to the room, then down again. We had to do that twice each way, since we both arrived and departed from Marseille and stayed in the same hotel both times.

Never again, I swore. I’m going to be really careful on my next trip, taking nothing but the absolute essentials. Just one suitcase for the two of us. It would have to be bigger of course, and would be somewhat heavier, but surely a single bag would be easier to handle than two... That’s a fine theory, I discovered, as long as you’re not traveling by train in France, where many of the smaller stations have no lifts and no elevators. (I was a bit shocked at the lack of concern for handicapped passengers, to be honest.)

Why do I always end up packing so much? There are a number of reasons. For one thing, my travels often combine business and leisure. That means I need both formal and casual clothing, and the shoes to go with them.

Yes, shoes are a major problem. Another one of my life goals is to find a single pair of shoes comfortable and sturdy enough for walking miles, while still fancy enough to go with a suit or a dress. In fact, I can’t walk in any pair of shoes for more than a day. With my seriously pronated arches, I get blisters from any shoes if I wear them consistently. Thus, even for a few days away, I need several changes of footwear.

Another issue is weather. I live in a tropical climate. If I’m on my way to some place more temperate, I have to pack warmer clothing, including bulky outerwear, plus lighter items to wear on the way home.

Yes, I admit I usually pack more items than I need. I don’t want to have to figure out a week’s wardrobe ahead of time. I like to have a bit of choice about what to wear. Is that a sin?

If it is, it’s one I pay for in backaches and exhaustion.

We had a friend visit, back when I lived in the US, a woman from Scotland who was former stewardess. She’d come for a two week vacation, all the way from the UK, and was traveling across America. All she had in the way of luggage was a rolling suitcase that would easily fit in the bin above an airline seat. Yet she managed to look fabulous during her entire three day stay with us.

I realized after looking at what she carried that one key to traveling light is having the right clothes. You need stuff that is compressible and that won’t wrinkle. Everything needs to follow the same color scheme, so you can mix and match. Plus you need lightweight fabrics that you can wash, preferably by hand. If your destination is chilly, plan to wear layers rather than bringing individual warm but space consuming pieces.

I’m proud to report that I am getting better, though I haven’t yet truly met my goal. Lately my DH and I have been managing with a single medium-sized bag for all our clothing and toiletries, plus two carry ons. Those hold our laptops, tablets, cables, charges and other essentials of the twenty-first century. That’s something I didn’t need to worry about when I went to Bali.

At the end of September I’m off to Europe on business. It will be a relatively short trip, but I’m already stressed about packing. I’m especially concerned because I will likely still need crutches due to my broken leg. Clearly I can’t pull a suitcase behind me.

Some people have nightmares about monsters or murderers. As for me, I have a recurring anxiety dream about packing. The details vary, but it’s always a situation where I have only ten minutes before I leave on a trip. I have to select what to take, often no more than what will fit in a backpack. I race around, frantic, trying to make decisions about what’s essential.

I guess that’s the critical point: deciding what’s essential. For the upcoming trip, I’ve decided that it doesn’t matter what I look like. The main point is surviving the twelve hours in the plane, not freezing to death, and managing to get around while I’m there.

I wonder if I can do that with just a carry-on?