My conscience is clear

We went shopping earlier today. Black Friday has reached us here in the UK so the city centres and malls are full of people sniffing out bargains. Needless to say, the car parks are pretty full too. We arrived at the shiny new mall near where we live and cruised around in search of somewhere to park. Zilch, so we did a second circuit and spotted one solitary space up one of the aisles. Problem was, to reach it would have involved going against the arrows painted on the tarmac. So, we did another circuit and approached from the right end this time, just in time to see a white van settling into our space. He’d spotted the space, and driven straight in the wrong way.

“Has he no conscience?” my husband wondered aloud.

Not sure about a conscience, but what that guy did have was a parking space.

So, here are some random thoughts of mine on the subject of conscience.

Over the years I’ve arrived at the conclusion that for most of us conscience is a somewhat fluid concept. Some things matter, to some people. Others, less so. I suppose I’m more of a pragmatist than my husband. If I’d been driving I doubt I would have even noticed the arrows on the ground. That space would have been mine. I guess though that’s why I’m the one with speeding points on my driving license and parking tickets stuck to the front of the fridge (I save them, like trophies). Those rules are more like guidelines, right?

Drink/drive laws though… now those might as well be etched on stone tablets as far as I’m concerned. Those rules matter. I don’t think I could bring myself to down a couple of glasses of prosecco then get behind the wheel, and if by some weird circumstance it happened I’d be wracked with guilt afterwards. But enough to turn myself in and possibly lose my license? Nope. Don’t think so.

There are lots of things that set me off on a mini-guilt trip. Forgetting to take poo-bags when I go out for a walk with my dogs is a case in point. Of course, I mean to take the bags. I have piles of them stashed in my kitchen drawer and in most of my coat pockets. I do my best, honest. But sometimes I screw up and on those occasions if one of my little Westies crouches down to do the necessary I’ll be casting furtive glances around, hoping no one sees and lining up my excuses (not that anything would assuage the vengeful approbation of the dog poo police). But do I go back afterwards to clean up? Not a chance. 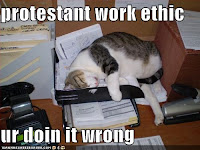 The dog poo police are one thing, but what about when no one would know? I was brought up with the Protestant work ethic firmly ingrained in my psyche. I’m convinced I should work hard, something terrible will happen if I don’t, and I don’t expect anything for nothing.  These days my idea of working hard is writing, and I treat it like a job. Because it is. But I work for myself, I keep my own hours, set my own targets and standards. If I take a day off, no one would have anything to say about it.

No one except me.

So, I work every day, all day, including weekends and a lot of evenings. I tell myself it’s because I want to, but in reality I feel guilty if I don’t write. I feel I’m letting someone down, though I couldn’t rightly say who that might be. I promise myself to do better tomorrow and I usually do. My conscience demands it.

And here I am, completing another OGG post, and on the correct Tuesday at that.

My conscience truly is clear.