You never know when you might get run over by a bus...

“Make sure you’re wearing clean underwear – you never know when you might get run over by a bus.”

My gran was a mine of useful advice and information, and this little homily was one of her favourites. A great believer in the importance of maintaining appearances in all situations, she wouldn’t have been caught dead in less-than-pristine knickers. What would the ambulance crew think? Or the A&E staff? Whilst I might privately take the view that the opinion of the paramedics would be the least of my worries in such circumstances, I have tended to take this one to heart anyway.

Clean on, every day. Sometimes more often than that.

Thinking about this post transported me back to my childhood, and the knickers in question back then. They were sturdy affairs, suitable for school where P.E. was usually performed in said undergarments. Girls’ school knickers (we would never, ever, refer to them as panties) usually came in serviceable colours (navy blue, bottle green, black). They would stretch nicely up to the waist and cover the entire bottom with some to spare. They invariably came with a matching vest or (dare I say it) a thing called a liberty bodice. That was a vest with buttons, as far as I can remember. Vests and liberty bodices were always white, at least in our house.

Underwear was a practical matter back then, and an important signifier of decency at a time when social ostracization was the worst thing that could happen to a family. Ours was an upper working class family (which was to say my grandparents worked in the mills, but in jobs where they bossed others around), and being considered ‘decent’ was a matter of great pride. There were things you just didn’t do if you didn’t want to get talked about. Things such as putting milk bottles on the table (milk was served from a jug – always) or going outside in your dressing gown (housecoat in the US, I think). Same with slippers – never for the outside world. There would be much judgmental talk and finger-wagging if anyone was seen just nipping to the corner shop less than properly attired.

“All fur coat and no knickers” was another of my gran’s well-used phrases, and referred to a woman whose behavior appeared decent on the outside but wouldn’t stand up to the sort of close scrutiny invariably applied by neighbours more than ready to find fault. 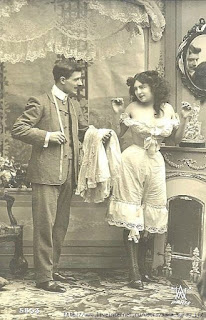 The Victorians understood very well the arousing properties of a pretty corset or drawers. So did the Edwardians, but before that it gets all rather hazy. I particularly like to write about Vikings, and as far as their nether garments go I have to make it up as I go along.  There’s plenty of information to be had on Viking clothes, arms, ships, houses, but precious little on what they wore under their tunics. I assume they went commando, which I daresay has its attractions.

But back to those naughty Victorians. Here’s a snippet from A Scandalous Arrangement, a novel of mine featuring one seriously decadent Victorian man and the lady who isn’t above a bit of raunchy play, all behind closed doors, naturally.

She unbuttoned her jacket and removed that, then 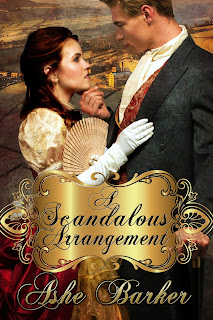 looked around as though seeking somewhere to deposit the garment.

Adam settled himself in a chair in front of the window. The light behind him would obstruct her clear view of his features, whilst he could see every detail of her. "Just put your clothes on the chaise longue behind you. When you're naked I'd like you to kneel on the floor, here, just in front of me."
Victoria gulped, but made no protest, though her perplexed expression told him her mind was whirling. Silence did not signify agreement. At least, not yet.
She unfastened her white blouse and removed that too, placing it on top of her jacket. Next she loosened the ties holding her skirt in place and peeled that down to her ankles. She stepped out of the pooled fabric and placed the skirt neatly with the rest.
Adam shifted in his chair, conscious that his erection was very obvious. He made no attempt to conceal it, preferring that she understood the effect she had on him. Her eyes widened when her gaze rested on the bulge betraying his arousal. Clad in just her fine silk combinations she presented an exceedingly fetching sight, concealing nothing of her curves. He would have defied a monk to remain unmoved. On another occasion he might have allowed her to remain as she was and enjoyed the display. The first time was always somewhat awkward though, for a submissive at least, and he preferred to press on.
"Quite lovely, Victoria. I applaud your taste in undergarments. Did you purchase that especially for me?"
"Yes. I wasn't sure what... I just wanted to look my best." Her lovely features were starting to pinken, but she maintained eye contact with him. There would be occasions when he would require her to drop her gaze, but for now he found her pride and determination admirable. He had no interest in a mewling, shrinking little virgin.
But she is a virgin, he reminded himself. He would soon remedy that though.
"Good choice. I may permit you to put it back on later, with the crotch left unfastened of course. For now, remove it please."
He loved the way her face flushed, the rosy hue starting at her neck and chest and rising steadily as she undid the buttons down the front. The display of bare flesh was tantalising as the two halves gapped open. She lifted her gaze to his again, and he raised one eyebrow deliberately. She needed to do as she was told, without hesitation or argument. He expected no less.
"I will not kneel." She tipped up her chin, defiant.
"No? Why not, Victoria?" He kept his tone deceptively low.
"I have agreed to do as you want, to allow you to do - things - to me. But I am not here to be humiliated, or debased."
"Of course not. You are here to be cherished, admired, pleasured. But those rewards have to be earned, through submission and obedience. Talking of which, I require you to be naked. I have said so on numerous occasions now so I will count to five. If you are not nude and on your knees by then I will consider our arrangement terminated."

A Scandalous Arrangement is available from Amazon
Posted by Ashe Barker at 11:06 AM