A promise is a serious thing. Our attitude to what we mean, what we intend when we give our word defines the quality of our relationships. It’s a marker for our integrity, the bedfellow to other important concepts such as trust, confidence, commitment. Relationships founder on broken promises, dashed expectations, the bitterness of disappointment.

As an author, of course, I’m minded to think that’s a good thing. Countless story arcs revolve around broken trust and the lengths characters will go to, either to redeem themselves or to get revenge.
Of all the stories I’ve written, The Dark Side remains one of my favourites. The heroine, Eva Byrne, is off the scale clever, but she has almost nil self-esteem and is engaged in a constant struggle with her mental health. She is drawn to the enigmatic Nathan Darke like a moth to a flame and falls for him utterly.

She owes all of this to Nathan. She trusts him completely, only to have that trust shattered. A more confident, self-assured and balanced personality would confront him, but not Eva. Her social skills are in the basement, she crumbles in the face of a broken promise, can’t handle it, can’t see past this betrayal. Crushed, convinced everything she believed in was no more than an illusion, a sick joke, she rushes off to lick her wounds.

Here’s the excerpt, from Darkest (book III in The Dark Side trilogy) 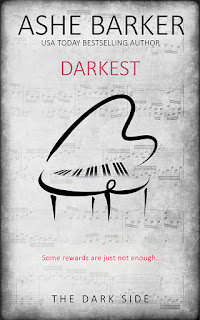