I’ve been having a lot of misses in my reading lately, books I’ve really struggled to connect with. For some reason, I’ve been reluctant to put these books down recently, and so one book will take me weeks to get through.

In contrast, though, I’ll give you the shining exceptions to the rule, the books I raced through. These left me wanting more just like them.

Every Day
By David Levithan 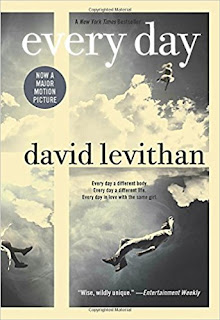 I found out about this book because it’s a movie, and I loved the premise I saw in the trailer. A wakes up in a different body every day, and consequently has both an unusual amount of insight into the human condition and more than a fair share of loneliness. The story starts the day A falls in love with a girl named Rhiannon, and chronicles an amazing attempt to pursue that love despite the fact that one of the lovers never knows who they’ll wake up as the next morning.

The book feels deeply queer--A identifies as genderless, and to love A, Rhiannon must confront questions about what it is that she loves about a person. It is a struggle for her to always love A for who A is, to deal with the various bodies that appear as her lover.

For the most part, the book is so wise about different bodies, though I did feel that the chapter in which A wakes up very fat carried less of A’s usual compassion and insight and more of the poison of societal disgust--even as it makes efforts to deal with that poison. It’s become very striking to me that it’s possible in our culture to have compassion for nearly every other human condition, and yet any time fat comes up, the moral judgment seems to come right along with it.

I raced through this book. It’s written beautifully, and also I needed to know what would happen. I’d highly recommend it.

A Hope Divided
By Alyssa Cole 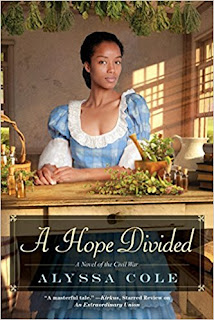 The second entry in Alyssa Cole’s Loyal League series is the story of the romance between a free black herbalist, Marlee, and a white Union spy, Ewan, during the Civil War. I loved the first book in the series, An Extraordinary Union, which was about a black female spy and a white male spy during the same period, and I ordered the second book the moment I finished the first.

So many things stand out. For one thing, Cole’s characters feel so unique. They have distinct quirks--Ewan turned to stoicism while growing up with child abuse, but his strange, clipped manners lead him to connect with Marlee intellectually in a way that she, used to having her scientific mind disrespected, really needs. These two feel so distinct from the characters in the first book, and I have to say that in many romance series, I feel that the characters are reskinned versions of each other from one book to the next.

Then there’s the setting. Cole’s research into the Civil War is deep and incisive. She looks well beyond the stereotypes about belles and brother against brother, bringing forward characters that are far too often neglected in these narratives. Reading A Hope Divided, I had a stunning realization that also embarrassed me a bit. Of course, not everyone in the South was for secession, and of course that would be for all sorts of different reasons (humanitarian, apathetic, patriotism, etc)--how had I never seen that before? The result is a much more satisfying view of the Civil War South, free of the gauzy nostalgia that so often poisons the time. Cole’s books grapple very seriously with racism, cruelty, and the cost of resistance, while also managing to uplift through a convincing portrayal of the power of love.

Really, I should quit struggling through the books that I’m getting stuck on and just go read everything these two authors have ever written...

Posted by Annabeth Leong at 7:38 PM