The Crisis in Midlife


I'll tell you how I've been feeling lately.

I've been feeling like every worthwhile thing I'm ever going to do in my life--everything good, everything useful, everything productive--I've already done. The best is behind me. I'm just waiting out my sentence.

Last month, my mother told me I'm not a spring chicken anymore. That threw me for a loop. Isn't your mother supposed to think of you as a child for always? But when I told my girlfriend, she said, "Yeah, well you're middle aged."

My ex, who (as you know) was much older than me, used to say that every time he looked in the mirror, he expected to see his 18-year-old self. And instead he saw an old man. It was jarring.

The thing I really didn't get is that a midlife crisis is... well... a crisis. Crisis in the sense of crisis counseling, crisis lines, crisis intervention. The term always made me think of sports cars and 22-year-old girlfriends, but there's more to the story. Holy Mother of God, is there more to this story.

I'm sure there are ways to feel useful again. Volunteer work and such. But volunteer works is just one more of those things I did when I was younger. I worked in the domestic violence sector for years, and I burned out so hard I can't even tell you. I've volunteered my ass all over this city, and most organizations (the big box charities in particular) have left me disillusioned at best and disgusted at worst.

In a perfect world, I would feel fulfilled by my work.  So I've devoted a lot of my time and energy to projects I felt would be helpful to others. The thing is, in order for your book to help anyone, someone in the world has to... read it. And when you get to the point where you write something super-meaningful and then you literally can't even give it away for free, it becomes pretty clear that the work isn't going to dig you out of this hole.

Now I get why people go back to what gave them pleasure as children, as youths. There's a simple joy to childhood that's so hard to recapture decades later.  The lights dim over time. The world is less shiny and bright.

Maybe I've been watching too many YouTube videos about nihilism and existential angst, but lately I've been wondering if I should even bother trying to do anything of value, if anything actually has innate value anyway, or if we're all just marking time.

I remember having fantasies, when I was young. Fantasies about all the exciting things I would do in the future. I would imagine scenarios in detail. It was really energizing. Made me want to get up in the morning and work toward my goals.

Now? In midlife, or whatever this is?

I don't have fantasies anymore. 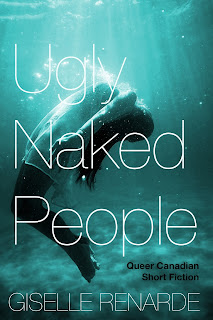 How do you get through life when it seems like your best days are behind you?

I'm taking it one day at a time.

I've been working at publishing all the stuff that's just sitting on my hard drive.  Most recently, I've released the second edition of my book Ugly Naked People. It's a collection of queer fiction. This second edition has a new stories, three of which have never been published before now.  No sense letting perfectly good fiction go to waste. Might as well get it out in the world.

If you're so inclined, Ugly Naked People is available from booksellers like Amazon, Smashwords, Kobo and Google Play.

Posted by Giselle Renarde at 1:17 AM