A flirtatious excerpt from Carrot and Coriander 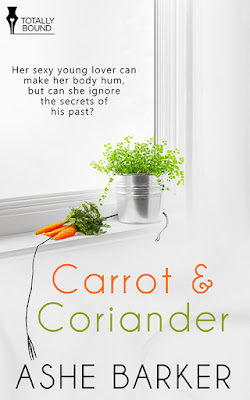 “I’ve got soup.”
The quiet, feminine voice startled him. He hadn’t heard her approach and realised she must have come out the back door this time, sort of crept up on him. Watching him when she thought he couldn’t see her, and now sneaking up behind him. She made him uneasy, edgy even. Truth was, he was itching to get his hands on her. His grubby, rough hands all over her smooth perfection. Not that he would. Well, not unless she asked very nicely. She shifted, started to back away, and he realised he’d been glaring at her. Shit - no good came of scaring his customers.
“I’m sorry. I was miles away. What did you say?” He pushed his lips into a grin, or sorts. The friendliest he could conjure up at short notice. But he was trying.
“Soup. Carrot and coriander. I made it. Lots of it. Too much really, just for me and Jacob. I wondered if you’d like some. For lunch or, maybe you could take some with you…”
Her voice trailed away, and he pulled himself up short as he caught himself glaring again. Bad habit. But soup! Did he look like the carrot and coriander sort? He was about to refuse, as politely as he could manage, but something stopped him. Maybe her obvious nervousness around him - was she actually shaking? And he did like carrots at least. Occasionally.
“Thank you. Soup would be - nice.” Did he actually just say that? Apparently so, because she smiled, her face lighting up. And he noticed she had green eyes, reminded him of a rather nice BMW he once nicked. And her hair was a definite red now he saw it up close, with chestnut highlights. And he smiled back. A real smile this time, one that involved his eyes too.
“I was going to have some for lunch. Would you like to join me? Unless you’ve got other plans, of course…”
‘Other plans’ would have extended only as far as the fish and chip shop two streets away. He found himself accepting her invitation to lunch, and only afterwards remembered that he was filthy, hadn’t showered in days, and probably smelled like mouldy cheese. Still, it was done now. And he could always have his soup outside.
Except she had other ideas. “Great. Lovely. Just come on inside then, when you’re ready. I’ll be in the kitchen.”
And so she was, all homely and sweet and wholesome, folding freshly washed laundry into a pile for ironing, as he entered from the back garden. He estimated her to be around forty, almost twice his age, but shit, she was still hot. In a moment of weakness his unruly mind conjured up a distinctly graphic image involving Mrs Saunders, her ironing board, and maybe a couple of clothes pegs. He stifled it, fast.
He cleared his throat, then, “I need to wash my hands, if that’s alright?” And the rest!

“Of course. Help yourself. I’ll get your soup.”
She drifted across the large kitchen to rummage in a cupboard, pulled out two pretty yellow and blue bowls and set them on the worktop next to the stove. A large pan sat there, wisps of steam floating from its surface. Mrs Saunders picked up a large spoon and stirred its contents gently before ladling generous helpings into each bowl. She carried them carefully over to the table under the window, and set them down. Moving up close to Callum as he rinsed his hands under the warm tap, she dug in the drawer next to the sink for cutlery. He was amazed, her closeness was giving him a hard-on. It must be just her, that pleasant, flowery smell perhaps. Or maybe that was the clean laundry. Still, there was a distinct - something - about her.
He eyed her over his shoulder, strangely irritated at the effect she was having on him. She seemed oblivious to his growing discomfort, concentrating on sawing huge chunks of white bread from a fat, round loaf. He had a suspicion the bread was home-made too. Walking somewhat awkwardly he managed to seat himself at the table and arrange the checked tablecloth discreetly over his lap.
The soup was surprisingly delicious. And the bread. He had two helpings of each. They ate in near silence, both acutely aware of the other, intensely awkward at finding themselves sharing a meal, a table. But still, here they were. Eventually, he was first to give in.
“How old’s your little boy, Mrs Saunders?”
“Three. And it’s Miss.”
“Excuse me?”
“It’s Miss Saunders, not Mrs. Rachel.” Her smile seemed shy, uncertain. As though she wasn’t sure he even wanted to know her name. He wasn’t entirely sure either, in all honesty, but since they were being nice…
“I’m Callum. Callum O’Neill.”
She stretched out her hand politely. “I’m very pleased to meet you, Mr O’Neill. Callum.” She amended at his slight frown. He took her hand, noticing once more its small perfection against his rough and still somewhat grimy paw. Her nails were beautifully shaped and polished, a pale, pearly pink colour, reminding him of seashells. Against his better judgment he allowed another stray mental image to form and focus, an image of those long, elegant fingers wrapped tightly around his cock, and said cock leapt straight to attention again. Shit. Now he wouldn’t be able to stand up without her noticing. Still, he loved the softness of her palm against his, and maybe held onto it just slightly too long. She didn’t seem to mind.
He dug around in his rapidly scrambling, testosterone-flooded brain and managed to find something polite. “Me too. And you make nice soup. Rachel.” Lame, but polite.

She smiled, nodding slightly in acknowledgement. Clearly, she appreciated his efforts. “Thank you. And you make nice rockeries. Callum.”
“We’ll see.”
“I’m sure. How long will it take you to finish it, do you think?”
He shrugged. “If the weather stays decent, a couple more days. Then I’ll be out of your way.”
“Right.” She nodded again, studied her empty bowl carefully. “You’re not in my way. And I might have other jobs for you to do. If you’re not too busy, obviously. Do you have a lot of work on just now?”
Sensing her hesitancy, but knowing an opening when one leapt up and clouted him around the head, Callum glanced up sharply. “There’s always something. Let me know what you need and I’ll try to accommodate you.”
His dark, vivid blue gaze caught and held her emerald one, and neither spoke for a few seconds, considering all the possible meanings of that phrase, the wealth of potential. This time, it was Rachel who cracked first. “Yes, yes, I will. Definitely. Yes.”
Flustered, she got up from the table and shuffled their empty bowls into a pile for the washing up. That done, she hurried back to the relative safety of her folding. Since his erection was showing no signs of diminishing he knew it was only a matter of time. Still, he stayed where he was. On impulse, he decided to ask a favour.
“Rachel?” She paused, a tiny pair of corduroy trousers in her hands, and looked at him nervously.
“Yes?”
“I wonder,“ he hesitated, how to ask without it sounding weird? “I’m going straight off somewhere after work. Would you mind if I took a shower here? I’d knock something off the bill for the hot water, obviously.”
He couldn’t help noticing she sagged in relief - what on earth had she thought was coming? Her voice sounded distinctly relieved. “Yes, of course. You’re welcome. I’ll be going out at around five to pick Jacob up, but just help yourself. It’s upstairs, first door on the left. I’ll leave you some towels out.”
“Thanks. I’ll just be getting on then….” He took advantage of the fact that she was digging in her laundry basket for more stuff to fold, and sidled behind her heading for the great outdoors where he might be able to find a secluded corner in which to subdue his rampant cock. He was out the door again before she had chance to spot the tell-tale bulge in his jeans.

Christ, he had an erection. My soup made him hard.
Rachel had limited experience with erections, certainly not recent experience, but there was no mistaking that. Bloody hell. She wasn’t sure whether to be pleased or outraged, but settled for something in the region of quietly smug. The memory of that thick, long bulge stretching the front of those sexy jeans, and his determined attempts to hide it from her, kept a smile on her face all afternoon as she wrestled with the financial affairs of Mssrs. Wright and Hardisty, plumbers of this parish. He was still hard at it (pun intended, she thought wryly) as she left to pick up her little boy at the end of the day. And when she returned twenty minutes later she saw immediately that his van was still there, under the trees at the side of her house, but he was no longer working.
Not that she really cared, of course. Not that she was taking notice.
The sound of running water upstairs met her as he let herself and Jacob in the front door. And as luck would have it Jacob needed a wee so she took him upstairs to the loo. Could have used the one downstairs, but still …
And that was how she came face to face with a bare-chested, absolutely beautiful young man, on her landing, his hair dripping onto his sharply chiselled shoulders and chest, his bare toes curling in her shag pile. His jeans were zipped but unbuttoned, and he looked about as disreputable as anyone she’d ever encountered. Especially on her upstairs hallway.
“Hello, said Jacob brightly, rushing past Callum on his way to the toilet, as though half-naked strangers appeared regularly in his home. Callum was irritated and more than a little surprised at his hostile reaction to that possibility, but decided it was none of his business. Still, it could be. Soon would be if she didn’t stop staring at him. Had he grown an extra head? Or maybe it was his dick with a mind of its own, once more threatening to poke its own dark pink head out the top of his jeans. He hastily fastened the button, but that only served to draw her attention.
And she saw. And blushed. Bright crimson. Wow, he liked that. A lot.
“Mummy! Mummy! Need soap” Jacob’s shrill little voice echoed along the landing.
For a moment Rachel looked confused, then, “Hold on, I’m right here.” Her eyes carefully averted she managed to pass Callum without actually touching him, and headed to the rescue. Watching her scurry along the landing Callum smiled to himself. Hell, he knew that look, knew exactly what was coming. Or should that be who?
Not now though, not today, with the little lad around. But soon. Very soon.

From Carrot and Coriander, by Ashe Barker      http://mybook.to/Carrot