Stuck at the Beginning

When it came time to write about this cycle’s topic, stuck, I found myself very much so. Like most writers, my first thought of being stuck is always in relation to my work, though I seldom get writers’ block. While I do have a lot of unfinished stories, most have been tucked away because I had other more pressing projects, or the energy just wasn’t there for them at the time. Some get finished, some don’t. Others have evolved into something else entirely or have been cannibalized by still other stories. Even if I am stuck in some part of a story with a plot logjam, almost always a good long walk will help me figure out what to do to move forward.

While there are a thousand other ways to be stuck that don’t involve writing, under the deadline for this post, the need to call to mind an example worth blogging about only left me more stuck. Oh, the pressure!

But blogging is writing, after all, so I did what I always do. I went for a walk. In fact, I went to the English Lake District and went for several very long walks. That got me thinking about the anatomy of stuck. Just exactly what does it mean to be stuck? Stuck is the starting place for a lot of great novels. When I got to thinking about it, it seems to me that stuck is the starting place for most archetypal stories. It certainly is the starting place of the hero’s journey, which is the ultimate story plot, because stuck is quite possibly the scariest place of all -- standing on a cliff with toes curled over the edge oblivious to the peril.

Stuck often takes the form of the perfect life, the ideal happy-ever-after being lived out day to day. While in the real world, that may be what we dream of and hope for, in fiction, there’s the reason why the happy ending is, in fact, the end of the story. What comes after the happy ending, from a reader’s perspective, is boring.

The subtext of happy ever after beginnings is “hold on to your hats, shit’s about to get real.” Our hero or heroine is stuck, and they are about to get unstuck in a really brutal, horrible way. In happy at the beginning stories, spouses die, are murdered, run off with someone else, kids are kidnapped or killed, great wealth is suddenly lost, in fact everything that matters is lost. That shattering point of becoming unstuck is where the story really begins. It is the being kicked out of Eden that we readers have been waiting for. Living the good life does not make for interesting reading unless maybe in a how-to book.

The second kind of stuck in story happens when the main character is truly stuck in a rut, same old same old, bored now, want out. This kind of stuck involves the hero or heroine of the story wishing something would change, wishing they were anywhere or anyone else. They are waiting, desperately waiting, for their life to begin. The story starts when they get their wish, and it turns out to be way more of a challenge than they bargained for. They are well on the path to discovery and adventure that will change them forever, if it doesn’t kill them first. It’s only at that point we readers have a story worth reading. And that’s the point at which we writers strive to make readers willing and happy to take that leap with our characters.

While stuck is the jumping-off place from which the real story begins, once that happens, it’s chaos that rules the day. Nothing is easy, nothing is orderly, nothing is safe. The driving force of the story is the mess that keeps getting messier and messier until the hero or heroine muddles their way through and out on the other side to their happy ever after, or at least their happy for 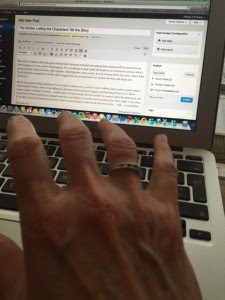 now. At that point, there are two choices for the writer. Either consider the tale finished and write THE END, or make a sequel that tears away the stuckness of a happy ever after and cast the poor hapless character back into chaos for round two.

I wonder sometimes if, for the “bored now” characters, stuck is hard to endure because stuck isn’t the natural state of things.  For those characters basking in their happy lives, there’s always a neurotic dose of waiting for the other shoe to drop. Either way, stuck doesn’t last because life is in flux, and everything about it is in motion. Nothing stands still for very long. The journey is cyclical, not static, and moving from stillness into chaos and back again is as much the shape of our natural journey as it is the shape of an interesting story. That being the case, it’s not surprising that readers love to live that journey vicariously, magnified, larger than life. And we writers love to write it for the very same reason. We see ourselves in that cycle, and on some level, even from the safe distance of story, we feel right at home.
Posted by K D Grace at 7:30 AM

Email ThisBlogThis!Share to TwitterShare to FacebookShare to Pinterest
Labels: stuck at the beginning, Writing