#WhatIvebeenreading Plagues, human slavery and bumps in the night

As usual, my literary consumption is made up of reading and listening. I love audiobooks, listen to them frequently in the car and on train journeys, especially now that I’ve invested in a super duper pair of cordless Bluetooth earbuds. And, as ever, I keep returning to one of my all-time favourites, Nora Roberts.

Ms Roberts used to write a lot of sweet(ish) romance, populated by modern royal families, wedding planners, reclusive and damaged heroines and the strong and sturdy types who ‘rescue’ them from their self-imposed exile. All good stuff. If you can ignore the shameless head-hopping she spins a decent yarn, does Mrs Roberts.

But of late I detect a shift to darker themes. Nora is not alone in that, many of us have embraced our darker side and while some are just too hardcore for my tender sensibilities, I tend to prefer the grittier storylines. Nora does not disappoint.

Year One chronicles the first year following a massive and catastrophic epidemic of some sort of plague which wipes out about 90% of the world’s population in a matter of weeks. The survivors are a random set of individuals who for some unspecified reason did not succumb to the infection and are left trying to survive in a world where systems and infrastructure are gone, law and order no longer exist and no one knows who to trust. Some of the survivors are supernatural beings – fairies, elves, shape shifters, demonic creatures, witches, and there are good and bad among those also. The tendency for at least some of the human survivors to blame these ‘others’ for the disaster which befell them is reminiscent of racism through the ages and no less stark for that.

Year One is a harrowing tale, and it doesn’t offer an HEA (yet – remember, this is only Year One). But the story’s premise is one I found fascinating. What does happen when all around you crumbles? How mindlessly do we rely on the structures we use everyday – health provision, transport, technical expertise, communications, not to mention the families we love and take for granted, and how would any of us cope when all these disappear? But also, the story tells of the resilience and grit of humans and others determined to survive and rebuild a world worth living in. 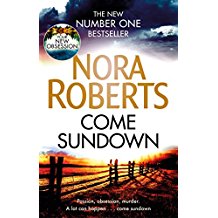 My current ‘listen’ is Come Sundown, also by Nora Roberts. This tells of the usual wealthy family running a successful business and the love interests curling gently among the characters, all of whom are competent, likeable, and living with the shadow of a family tragedy. One of their number, a girl of eighteen, left home about twenty years before and was never heard of again. Her mother, sister, niece all harbour carrying degrees of curiosity, grief, resentment. The underlying story is one of unspeakable cruelty and violence, where a man imprisons a young woman, beats and mistreats her mercilessly and keeps her as his personal sex slave for years and years and years and years, taking away her babies soon after they are born. I don’t know how it will end, but I’m eager to find out. 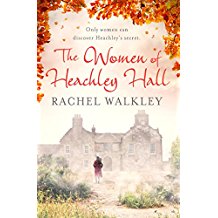 Recently I finished reading a ghost story with a bit of a twist. I’m not normally especially fond of ghost stories but I knew the author, it was her debut novel, so wanted to give it a try. The Women of Heachley Hall is a beautifully crafted tale of love, regret, penance and redemption. Set in the gorgeous Norfolk countryside the descriptions of the setting are almost as entrancing as the unfolding relationship between the young woman who inherits Heachley Hall and the enigmatic handyman who keeps her company amidst the weird goings on and bumps in the night.