Inheritance - The story of Sapper Tom 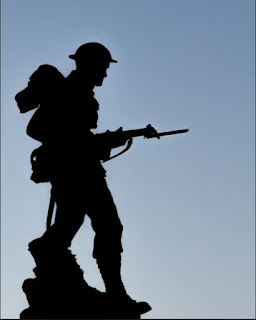 If you live in the UK you will have seen plenty of these silhouette memorials. Called the Silent Soldier, they have been installed in towns, cities, villages all over the country to commemorate the centenary of the ending of the First World War. For so many of the soldiers who died between 1914 and 1918, this is all the memorial they might have, this and their name carved into a local cenotaph somewhere.

Remembrance Sunday takes place in the UK on 11 November every year, but was especially poignant this year. My local village invested in a bugler to play The Last Post, and sales of poppies went through the roof. I’m as content as any to honour the sacrifice made by those soldiers, though I struggle to see much glory in death. I prefer the white poppies, symbolising peace. It’s telling, perhaps, to note that the first soldier to die fell just a few yards from where the final man lost his life. Such was the futility of it all.

I wanted to take this opportunity, though, under the guise of Inheritance, to tell the story of Sapper Tom. Sapper Tom – Thomas Leadbeater – was my grandfather’s brother. He would have been my great-uncle, but he died in the First World War. He did quite well, considering, managing to survive almost two years in the trenches before being killed in 2017.

The telegram that the War Office sent to his mother was curt, to say the least, coldly informing her that her son was missing. It was followed a few days later by another, conforming his death. I can barely start to imagine the torment my great-grandmother suffered in those days, wondering if, against all the odds, Tom might have survived. Later correspondence from the War Office, in response to inquiries she made, inform her that Sapper Thomas Leadbeater’s remains are interred in the vicinity of Alexandria. No grave, no certainty, even, of exactly where he was buried. Only the vicinity.

More correspondence dated 1920 confirms that the war pension my great-grandmother had claimed following her boy’s death in action was to be discontinued. This, at a time when there was no welfare state and older people relied on their children to support them in old age. I can only assume that many, many of that generation had to somehow fend for themselves. Mercifully, my great-grandmother had surviving children, including my grandfather so she wasn’t destitute.

Sapper Tom was rarely spoken of after the War, though his younger sister, Nora, did keep the letters he sent to her from the trenches in which he advises her, in the way of an older brother, not to walk through dark and lonely alley ways at night. He also asked her to take care of their mother, should the worse happen…